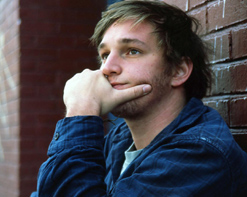 Summer salutations to all of my programming friends nationwide! It’s Andy Gesner and the staff from HIP Video Promo, back with a new clip from a passionate singer-songwriter who has been winning the respect of folk fans and indie rock enthusiasts alike. Willy Mason first came to international attention with “Oxygen”, a plainspoken statement of faith and purpose, and a Dylanesque critique of contemporary culture. “We can be richer than industry,” sang Mason, “as long as we know that there’s things that we don’t really need.” Urging his audience to take heed of the “forgotten America” that believed in justice and equality, the courageous guitarist sang out against hypocrisy, greed, and overmedication. So articulate was the track that it’s still hard to believe that Mason was only nineteen years old at the time of its release.

“Oxygen” was a highlight of Where The Humans Eat, Mason’s critically-lauded debut, and even broke into the British Top 30 – a remarkable feat for a bare-bones acoustic track. After the U.K. release of the set, the young singer-songwriter brought his music to the Glastonbury Festival, and toured with Beth Orton and Radiohead (Thom Yorke is a big fan.) Now, Mason is back with his followup – and we’ll be damned if it doesn’t completely deliver on the promise of “Oxygen”. If The Ocean Gets Rough features eleven songs just as emotionally direct, honest, and searching; better still, Mason’s singing and playing are more confident, and his lyrics have achieved a new maturity and resonance. The arrangements are better adorned, too: Mason’s plaintive-everyman voice and punchy acoustic six-string are joined here by strings, mandolin, occasional organ and piano, and some of the most radiant and empathetic backing vocals you’ll ever hear on a folk-rock album.

The emphasis remains, however, on Willy Mason’s powerful, philosophical lyrics. “Save Myself” is self-affirming and empowering, but there’s a substantial amount of disgust here, too. Like many Americans, Mason has clearly had it with the government, and he’s not afraid to throw down the gauntlet. “We are still searching for liberty”, he warns, “we are still hiding from reality”. The singer-songwriter wonders aloud about the destruction of New Orleans and our broken educational system, resists the lure of consumer society, and reminds himself that his own hand – and the love of his partner – is all he truly needs.

It’s a gutsy proclamation from a very nervy writer, but he’s got the skills and charisma to back it up. Mason has been known to tame a raging rock audience with nothing but his voice and acoustic guitar; he’s plainly not afraid to stand on his own. Shawn Kim’s pretty clip for “Save Myself” finds Mason alone in a wide and well-lit room. Barefoot and dressed in white, he sits in a chair, strums, and addresses his challenge to the camera. Before long, streams of clear liquid are trickling over his hands and legs (and guitar, too), and plastering his hair to his scalp. All at once, a straitjacketed Mason is plunged into a tank of deep water. Baptized and cleansed in the most dramatic fashion possible, he struggles to break free of his restraints. After a fight, he succeeds, and kicks for the surface. Back in the white room, the streams reverse themselves, flowing backward across his limbs; in the indoor sea, his hand breaks the surface of the water from beneath, followed by his head, gasping for air, but cleansed and very much alive.

Here at HIP my staff and I are prepared to do anything we can to help ensure this deserving video makes it’s way into your programming. Risa Morley and the Astrwalerks team has hooked us up with everything we need to help you out, including a plethora of copies of Willy Mason’s new album, If The Ocean Gets Rough. If you need more info, call Andy Gesner at 732-613-1779 or e-mail us at info@HIPVideoPromo.com. You can also visit www.Astralwerks.com to find out more about Willy Mason.