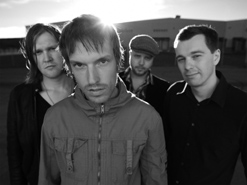 Howdy music video friends, it’s Andy Gesner and the staff from HIP Video Promo here with a brand new video from a Northern European band with international ambitions and a world-class sound. If the past few years have taught us anything about our musical tastes, it’s that Americans are crazy for Scandinavian indie rock. It could be the brooding feel or the cinematic style of the songs, or perhaps it’s the emphasis on anthemic choruses and sweeping melodies; whatever the reason, stateside listeners have fallen in love with the Swedish, Danish, and Norwegian underground. Bands like the Shout Out Louds, The Knife, 120 Days, El Perro Del Mar, and may others have shown that romantic rock balladry and fatalistic Nordic gloom are a natural match. To that list of distinguished bands we now add The Windupdeads – the latest Swedish combo to steal the hearts of lovelorn indie rockers around the globe.

And to introduce their own brand of indiepop to the States, The Windupdeads chose a suitable vehicle – the hippest show on American network television. After “Reverse Of Shade”, the band’s lead single, was featured in promos for Gossip Girl, online chat rooms and message boards crackled with curiosity: who was this new band with the irresistible sound? But excitement about The Windupdeads’s debut was not confined to fans of the CW drama – online leaks and teaser videos from the album ensured ‘net anticipation. The Windupdeads arrives on these shores later this summer, and promises to increase the band’s profile even further. It’s a collection of deliciously moody, artful and emotionally forthright indie rock songs, each one instantly ingratiating, earnest, and sharply-performed. The upcoming album will feature a full-length version of “Reverse Of Shade”, the rootsy “Someday”, the aching “The End”, and other tracks that have become known to thousands through The Windupdeads’s popular website and mySpace page.

It’ll also feature the gorgeous “On Your Way Out” – which is, for our money, the best song in The Windupdeads’s catalog. Here’s a ballad ethereal enough for Neil Finn, and sufficiently radio-friendly to slot into a playlist with Keane, The Fray, or Snow Patrol. The song has earned the Swedish band copious comparisons to Parachutes-era Coldplay – and in the “On Your Way Out” clip, The Windupdeads pay a visual tribute to Chris Martin’s storied combo. Just like the “Yellow” clip, the “On Your Way Out” video makes evocative use of slo-mo, creating an otherworldy vibe by (slightly) retarding the footage of the band’s frontman in action. Indeed, the “On Your Way Out” clip consists of a single long shot of the Windupdead’s singer’s head and torso; like so many other memorable spots, he performs the song to straight to the camera, snowflakes falling behind him. It isn’t one unbroken phrase, though: when the song hits its hooky chorus, the singer goes still, and the words are flashed over his impassive face, one at a time, in strict rhythm. Like other Windupdeads videos, the colors are soft and the light is muted; still, there’s something ineffable that draws the viewer, time and again, to those grey Scandinavian skies.

We’re hyped to be working with our friends at One Eleven Music to champion this indie rock gem.  If you need more info, call Andy Gesner at 732-613-1779 or e-mail us at info@HIPVideoPromo.com. You can also visit www.111Records.com to find out more about The Windupdeads.