Worth Taking “Am I The Only One” 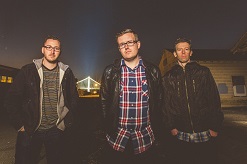 Artist:
Worth Taking
Label:
Jerod McBrayer
Video:
“Am I The Only One”
Director:
Arton Studios
Add Date:
December 6, 2018

“If Taylor Swift was a rock band, it would sound like Worth Taking.” That’s what this San Francisco-based trio says on their Facebook page, and we’re inclined to agree. Raised on a diet of Jimmy Eat World, blink-182, and Green Day, they blend raw punk sounds with infectious, sugary vocals. Lyrically, they explore themes ranging from love and hope to our ongoing struggle with morality.

Worth Taking is the brainchild of Atlanta native Jerod McBrayer, who began exploring this new sound as a creative outlet to his punk bands. He recorded the debut Worth Taking EP Anxious in 2011, and after promoting it at the Cornerstone Festival, headed out west. Once in San Francisco, he met Chris Self, who played in the Adeline Records band Fetish, and the two quickly hit it off. With this new lineup, Worth Taking’s live show was made even more vibrant. They’ve continued to write and release music, most recently sharing their sophomore album Hangman in 2016.

Now featuring drummer Chase Kossack, Worth Taking have returned with “Am I The Only One,” a new standalone single. McBrayer says of the song, “The big take-home is feeling like you are the only one who’s seeing what’s happening around you.” While it’s not an entirely political track, he hopes to express the feeling of seeing so much happening around you that everyone else seems to be ignoring, leaving you with the sense that you’re the only one seeing it happen. The “Am I The Only One” video was created by an outside producer, who compiled footage from another project done overseas.

Here at HIP Video Promo we’re pumped to work with Worth Taking and hope you embrace the new clip for “Am I The Only One” as much as we have. We’d be thrilled to see this video added to your cherished programming and online presentations in a timely fashion, so please check it out as soon as you can! Rest assured we’ll have plenty of Worth Taking merch available for on-air contests and giveaways so don’t hesitate to get in touch if you’d like to get your hands on some. For more information on Worth Taking please contact Andy Gesner and the HIP Video Promo team at (732)-613-1779 or email us at info@HIPVideoPromo.com. You can also check out www.WorthTaking.com for more information.