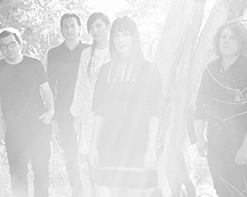 HIP Video Promo is pleased to present the exceptionally creepy new video for Xu Xu Fang’s “Noir State Beach”, the first single and video from the band’s upcoming full-length album featuring guest Michael Shuman of Queens of the Stone Age. Xu Xu Fang is set to make waves with their unsettling clip directed by long time Spike Jonze collaborator Casey Storm, and starring actor Luke Grimes of True Blood and the upcoming feature film, Fifty Shades of Grey. “Noir State Beach” premiered on RollingStone.com who in a feature story wrote, “Xu Xu Fang’s music is so moody and emotional that it almost demands a visual accompaniment.” With a sound at once dreamy and direct, LA-based quintet, Xu Xu Fang, create sonically-dense rock with a psychedelic edge. The Onion describes them as “Enormous, dark, psychedelic, and beautiful, full of meditative moods that haunt the diaphanous triangle formed by Pink Floyd, Radiohead, and Sigur Ros.”

In rotation on Los Angeles tastemaker radio station KCRW, Consequence of Sound describes “Noir State Beach” as “Stunningly beautiful moments amidst the chaotic buildup of spiraling distorted guitars.” The song itself reached #12 Debut on KKBB’s Top 100 radio chart, and is a perfect example of Xu Xu Fang’s knack for making music with an affecting atmosphere. Simone Raymonde (Cocteau Twins) reached out to the band raving, “Fuck me sideways if this isn’t some of the best new music I’ve heard.”

“Noir State Beach” begins with a four-on-the-floor beat while an electric guitar chugs a tense rhythm. It’s a foreboding sound that delivers on its promise. A bass guitar enters the mix, and dark synths begin to swell before the song takes shape with heavy drums and the seductive timbre of a female voice. In contrast to the relentless feel of the verses, however, the choruses burst open in slow motion to enormous effect, briefly transporting the sound to another plane before tightening up once again. In the song’s coda, the band lets loose, riding a gnarly riff to its dramatic conclusion. Throughout, the sound is so three-dimensional that the addition of a visual element fits perfectly. Thankfully, Xu Xu Fang rounded up some top-notch talent to deliver an exceptional video for “Noir State Beach.”

Directed by Casey Storm, who as costume designer, marked his fourth feature film collaboration with Spike Jonze on the Academy Award winning film Her, Storm has previously designed costumes for Jonze’s acclaimed films Where The Wild Things Are, Being John Malkovich and Adaptation, and has worked on a wide range of music videos including Katy Perry’s latest video, “Birthday,” and for artists, Michael Jackson, Metallica, Beck, The Beastie Boys, The Cure, Bjork, and Yeah Yeah Yeahs to list just a few. Cinematographer Chris Blauvet won the 2014 Sundance Cinematography Award for his work on the film Low Down, and is Director of Photography on the Spike Jonze directed 2013 YouTube Music Awards, and Sofia Coppola’s The Bling Ring.

The clip features Grimes as a driver who suddenly finds himself descending into madness. Things begin unassumingly: He gets into his car, selects “Noir State Beach” on his iPhone, and heads out for a drive. But while stopped at a red light, he notices a strange man (Steve Railsback who portrays Charles Manson in 3-time Emmy nominated 1976 movie Helter Skelter) dressed in a suit and hat, holding a cardboard sign that simply reads, “Xu Xu Fang.” The man approaches his car window and slams the sign against the glass before he drives away unnerved. The video then takes an eerie turn as the driver begins to see this same man again and again along his lengthy route, sending him into a mental panic, questioning his own sanity. The tension builds with each inexplicable appearance until a final showdown in an alleyway pushes the driver over the edge and leads him down a path that changes him forever. No spoilers!

For more information on this exciting band and their new video, please contact Andy Gesner and the HIP Video Staff at info@HIPVideoPromo.com . You can also visit www.XuXuFang.com for more info.