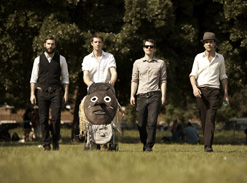 Howdy programming pals! It’s Andy Gesner and the staff from HIP Video Promo bringing you a hot new video. Our favorite clips to push are the inexhaustible ones – the videos that keep getting better with each successive viewing. We love bands that cram in so much detail that their videos reveal new mysteries with every playback. It’s no secret, then, that we dig animated clips, since the only conceptual limit on a cartoon is the artist’s imagination. But a few brave bands – ones with theatrical impulses and creative wardrobes – make live-action videos that are just as complex and detailed as the animated clips. Then there’s “Darlin’”, by the XX Teens. We say without hesitation that the video for the song is one of the most colorful, playful, imaginative, and wigged-out things we’ve ever seen. And not a minute is animated.

The song is itself a wild ride. A hyperactive drum track supports a propulsive distorted bassline, chanted, back-and-forth Mark E. Smith-style vocals, chicken-wire guitar, and a battery of steel drums. Frontman Rich Cash hollers about love, lust, art, and intelligence assessments as the band charges in all directions at once; it’s an exhilarating listen, and one that the NME has already declared one of the songs of the year. It’s all part for the course for the XX Teens, who’ve already moved to the top rank of the world’s most audacious and entertaining experimental pop acts. The revealingly-titled Welcome To Goon Island collects the singles that have electrified the British underground, and adds to them several new tracks that do not skimp on delirious oddness.

XX Teens are just as fascinating in action; their performances are raucous, explosive, and compulsively danceable. The group’s chaotic energy saturates the unforgettable “Darlin’” clip. The video crowds scores of young and theatrically-dressed people onto some kind of impossible shipboard for a party that isn’t clearly explained, but which redefines the expression “off the hook”. Costumes alone are stunningly original and eye-catching: a pirate-vagabond, a strange sea-creature with tentacles hanging from its sides, a gigantic paper-maché thumb and forefinger, puppets, ingénues, bow-tied businessmen baby birds with Pinocchio noses. They listen, intermittently, to Cash as he delivers a speech – he holds many spellbound, while others are astonished, and others are simply terrified by the force of the lecture.

In the extended version of the clip (which extends the party to nine minutes) the bandmembers rattle around inside the bell of a trumpet. The edit – which you’re getting – appends a bizarre and mystifying coda in which the sea-monster stumbles away from the crowd on a desolate beach. Back at the shindig, kids blow into party favors while the steel drummers hammer in strange synchronicity – and not always in time with the song! We’re treated to an arresting fish-gutting sequence(!) Members of the XX Teens sing from between the lines of gigantic red letters; one sits in a garret and types as he sings. A crumpled piece of paper from his desk lands on the deck; there, it’s the size of a large boulder, raising more questions than it answers. Is the party the creation of the writer’s berserk imagination? Is he on the boat, buried in a stateroom, or are his unhinged fantasies somehow keeping the craft afloat?

Big thanks to Stephanie Trick and crew at Mute for the hookup of copies of Welcome To Goon Island for your on-air giveaway needs. Drop us a note if you’d like to get your hands on some! If you need more info, call Andy Gesner at 732-613-1779 or email us at info@HIPVideoPromo.com.