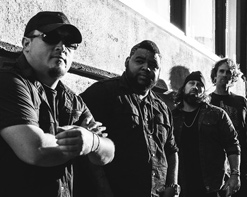 YEAR OF THE LOCUST

New York’s Year of the Locust is doing things the old fashioned way. Rather than relying on false accolades and manufactured hype, the band has taken their furious live show and stellar songwriting to the masses directly. Extensive touring throughout the country has endeared the band to fans and peers alike. Their new single, “Rise Up,” is a call to arms for the countless citizens of the world who are no longer willing to sit idly by and have their lives dictated for them.

Last year the band dropped their EP, Home, which put the band on tour supporting legendary guitarist Jake E. Lee and his band The Red Dragon Cartel. To this day Lee continues to be an avid supporter of the band. The band channeled that support and inspiration into their debut full length album, DEVOLVER, available 7/22. The first single, “Rise Up,” is some of the most innovative & energy driven music the band, comprised of Scot McGiveron (Lead Vox & Guitar), Fred Serrell (Bass & Vox), Peter Hellers (Vox & Guitar), and Raeshwan Greene (Drums), has produced to date

The video for “Rise Up” is every bit as ferocious visually as it is sonically. They’re dressed rather dapper as they rip through a blistering performance of the song. This juxtaposition of fine threads and metal music is complimented by scenes of destruction within a graffiti-laden warehouse, as well as footage of social upheaval and unrest across the globe. The message of the song is reinforced with the unapologetic visuals proclaiming that the time to topple the old world order is now!

We’re very excited to be working closely with Year of the Locust to bring you this incendiary new clip. We are happy to do whatever is required to get this video into your programming, so please don’t hesitate to get in touch with us here at HIP Video Promo. You can all (732)-613-1779, email at info@HIPVideoPromo.com. You can also visit www.YearOfTheLocust.com for more info on Year of the Locust.

Visit Year of the Locust