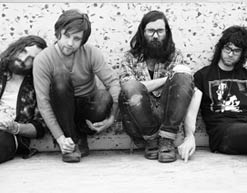 Hello dear programmers! It’s Andy Gesner here and HIP Video Promo crew bringing straight to you another classic performance video – this time from the Canadian outfit known as Yukon Blonde. This upbeat foursome have delivered to us “Wind Blows,” a video that hones in on just how Yukon Blonde vibes as a band, with a slick bit of video production.

The clip for “Wind Blows” starts off in the most literal sense. Raindrops start dripping off of a well-worn house as the line “Listen to the raindrops outside of my window” kicks in. We then realize that the foursome comprising of Yukon Blonde reside in this house and casually, it seems like it is just another day of the band practicing in their living room. Amidst close-ups of them playing and the camera panning around the band, we’re taken on a tour throughout the house, which, moments later, appears abandoned. Before you know it, what may have started off as a peaceful rainy day breaks out into a full-blow party with confetti and balloons shooting off from all over the place.

It’s the type of close-knit gathering you can see yourself being a part of, and it’s that kind of feel-good energy Yukon Blonde is ultimately all about. Though the video for “Wind Blows” may remind you of those mellow April days when you would stay in because of the rain, Yukon Blonde remedies that feeling with their power-pop melodies and singalong lyrics that are a sure to be stuck in your head.

Yukon Blonde is simply a band that knows how to fully compliment each other through and through. It’s no wonder the band has been a staple in their native Canada. They’ve been together since 2005 and have tightened their harmonies and made their hooks even catchier throughout the years. Just check out their most recently released, self-titled LP to see what we mean. They’ve been recognized by the likes of Billboard already and are on their way to making a killing in the U.S.

We are beyond thrilled to be working with the team at Bumstead and Nevado in order to fully champion Yukon Blonde. They’ve been kind enough to hook us up with copies of the band’s self-titled full length release and we’d love to hook you up with copies to check out! If you need more info, call Andy Gesner at 732-613-1779 or email us at info@HIPVideoPromo.com.