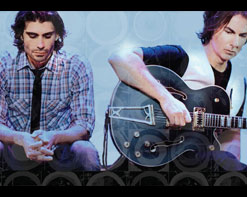 Zeroes are two multi-instrumentalists with one sound, two solo artists with one vision, two souls with one purpose: to open hearts through the sound they make. Separated by a handful of states and a lifetime of musical experiences, Tony Bernardo and Daniel Scott converged to form Zeroes. The level of trust they had for each other was instant, but grew even stronger over the course of ten long months in the studio. The soundscape of a troubled past contrasting with the bottomless optimism of a true believer, Tony and Dan had a fiery dynamic that propelled the rocket, and nearly sank the ship. In their brand new video for “Machines and Magnets” the duo perfectly showcases not only their skill for exceptional songwriting, but also their propensity for pushing the limits and shattering conventional wisdom.

When describing their new album, 00:00, Zeroes embraced all things spontaneous and uncensored. No idea was turned down for being “too this” or “too that.” The end result is an offering that seamlessly glides from chest rattling rock to nuanced acoustic folk. They entered the studio with no stated goals other than to make music that matters. This sort of freedom of mind is exactly what the doctor ordered to allow the duo to dig deep not just on the musical side, but also on the personal side. The inspiration is all as real as it comes and never leaves the listener on the outside looking in. This is a journey for everyone involved.

The video for “Machines and Magnets” is a high energy piece that shines a spotlight not only on the ambitious, inventive sounds of Zeroes, but also of the fluid art of the human body. Zeroes sets up shop onstage inside an empty theater and the clever camera shot shoots straight into the seats, complete with a lone spotlight projecting on the stage. The energy of Tony and Daniel is undeniable, but the real focus of the video is Louis Gordon, whose performance of pop and lock dance turns the video from a simple performance piece into a genre-stretching exercise. The band says “it was fun to work with another fantastic artist and blend styles without genre limitations.” It’s this sort of artistic leap of faith that has guided Zeroes from the beginning and has once again proved invaluable to their blossoming career.

We’re very excited to be working with Zeroes to bring you the new video for “Machines and Magnets.” The video resonates on so many levels and we’re confident it would slide in perfectly in all of your upcoming programming! Please get in touch with Andy Gesner and the HIP Video Promo team at (732)-613-1779, email us at info@HIPVideoPromo.com. You can also visit www.SecondsAfterMusic.com or www.ZeroesMusic.com for more info on Zeroes.