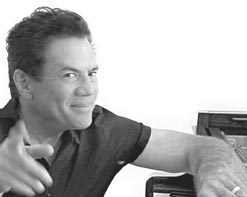 Artist:
CORY CHARLES
Label:
LUNATICWORKS
Video:
“IF I COULD CHANGE ANYTHING IT WOULD BE YOU!”
Director:
Cory Lerios
Add Date:
June 12, 2015

Well for starters, Cory Charles is not the guy that co-penned several mega hits for the 70’s & 80’s platinum selling pop/rock band Pablo Cruise, including “Love Will Find A Way” and “Whatcha Gonna Do?”…..

He’s also not the guy that wrote the world wide hit theme and underscore for “Baywatch” which continues to be an international phenomena playing in 145 countries…..it’s important not to mistake him for the guy that’s received several Emmy Nominations and actually won the coveted Award for “Music Direction” for the longest running soap in history…”Days Of Our Lives”….The Theme from Disney’s “Kim Possible” wasn’t his, nor were scores from the hit TV shows, “Flipper”, “Max Headroom” and “The Land Before Time” just to name a few credits Cory Charles had nothing to do with…

But…….Let’s be clear…….Cory Charles IS solely responsible for writing and producing his long awaited and long overdue upcoming release, “IF I COULD CHANGE ANYTHING, IT WOULD BE YOU.” Equal parts Rupert Holmes, Randy Newman and Weird Al, this guy is a character for sure!

In “If I Could Change Anything, It Would Be You” he voices his frustration with the woman he loves the most. The video is a black and white clip splashed over top with the song’s lyrics colorfully splashed over the top. Cory serenades the camera from the piano, while the object of his affection is juxtaposed with all of her endearing quirks and behavior. She’s a handful, but she sure is magnetic. Trust us, Cory, we feel your pain!

Let us know what we can do to get your support for this video and fantastic artist! Please don’t hesitate to get in touch with Andy Gesner and the HIP Video Promo staff at (732)-613-1779 or email info@HIPVideoPromo.com .

Cory Charles "If I Could Change Anything It Would Be You!" (Starring Erika Jordan)

Artist: CORY CHARLES Label: LUNATICWORKS Video: “IF I COULD CHANGE ANYTHING IT WOULD BE YOU!” […]