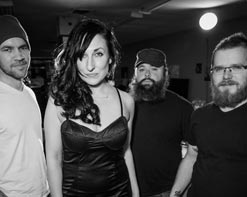 With their symphonically powerful sound and an arsenal of brand new material, mid-Michigan’s Darling Down is prepared to show the world that they are ready to stake their artistic claim in the territory of modern rock. With lyrically relatable songs full of enough edginess, passion and real life to appeal to a wide audience, Darling Down’s songs are catchy, intriguing, and heavy; beautifully sung, constructed and arranged. For your consideration we bring you the new music video for “Never Tell,” a song that brings all of these qualities into one skull rattling clip.

The “Never Tell” video is a brutally engaging piece of cinema, not for the faint of heart. It begins with a frightening street kidnapping of of a rather professional looking woman (portrayed by Legault), who is then brought into an empty warehouse where her bandmates play the part of captors and interrogators. They throw everything they have at her to try to get info from her, specifically “Where’s Cypher?” They erroneously underestimate this girl’s survival instincts and a vicious fight breaks out as she fights her way out of captivity. But can this one woman overcome three hulking, angry men? Check it out and see for yourself!

We’re very pumped to be working with Darling Down to bring you this killer (literally) clip! The band will be hitting venues throughout the Midwest, so if you’d like to catch them in your area, please hit us up and we’ll hook you up! You can contact Andy Gesner and the HIP Video Promo crew at (732)-613-1779, email us at info@HIPVideoPromo.com . You can also visit www.DarlingDown.com/ for more info on Darling Down.