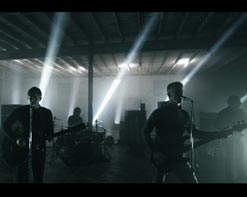 Every music fan knows Deep Blue Something’s smash hit “Breakfast At Tiffany’s.” Everyone might not know that drummer John Kirtland is also the man behind Kirtland Records, who has brought artists like Sarah Jaffe, Polyphonic Spree, Toadies, The Fixx, and others, onto our radar in recent years. “Breakfast At Tiffany’s” is widely recognized as part of the pinnacle of mid-90’s alt-rock musicianship. It’s with true excitement that we have the honor bringing you the first new single and video by Deep Blue Something since 2001! From their upcoming album Locust House, the song is “All Make Believe Off” and we’re convinced this is a band whose skills and chops have only gotten better over time.

After blasting up the charts with “Breakfast At Tiffany’s” the album Home was certified gold and the band was poised to continue on their trajectory. Unfortunately, and like so many other artists in the major label world, they were sidetracked and delayed by mergers, legal technicalities, and all of those things that so perfectly derail the momentum of a band. The band toured hard behind the eventual release of Byzantium (1998) and Deep Blue Something (2001) and after 10+ years on the grind, they took a hiatus.

Of course, that’s not to say they didn’t stay busy. John Kirtland formed Kirtland Records, which is a hub for exceptional talent on the rise, with a focus on their Dallas-area base. Brothers Todd and Toby Pipes went on to become accomplished producers in their own right, working on projects as Flickerstick, Calhoun, Moonshot Radio and more, with highlights in Mix Magazine and Best Producer honor from the Fort Worth Weekly three years in a row. But as much as they’ve all accomplished behind the desk, the bug always bites again, and it’s time for them to resurrect Deep Blue Something. As expected, they haven’t lost a step, as shown on their new album Locust House, which is a collection of finely crafted pop rock songs that weaves in layers of guitars, seamless harmonies, and melodies that are clever, refined and a welcome change of pace.

The first new single, “All Make Believe Off,” is everything we want it to be. It’s no frills and straightforward in it’s approach. The same approach is taken for the music video. The band performs in a dark warehouse space, with only a scattered batch of lights beaming and moving around to provide the glimpses of the band in their element. This is a band that has always been about letting the music do the talking, and while it’s easy to resort to cheap thrills, they stay true to their approach and present us with a video that is an easy, enjoyable watch.

Deep Blue Something "All Make Believe Off"