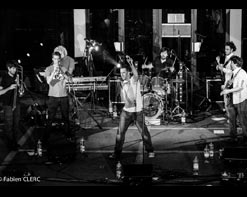 DRUNKSOULS, hailing from the beautiful southern French coastal town of Marseille, have earned a strong reputation for being one of the most engaging and adventurous music groups on the musical landscape. They’ve accomplished this in part by taking their reggae roots and infusing a healthy dose of pop rock approach and attitude. The first single we brought you, “Human Race,” was a real banger, with horns blaring and the energy kicked up to 10. For their follow up, “J’ai fait un rêve,” we get to see a more dialed down example of their talents.

Since their formation in 2012 the band has been gaining fans through a successful combination of relentless touring, prolific album releases, even crossover placements of their songs in the documentary film, I Believe I Can Fly (Flight of the Frenchies). They’ve recently released the compilation album Just Before Chaos, which is a combination of older favorites as well as new tracks. “Human Race” has grabbed over two million views on YouTube, and if the pace set by the recent release of “J’ai fait un rêve” is any indication, those repeat numbers are not far behind.

For the “J’ai fait un rêve” video, DRUNKSOULS pulled out all of the visual tricks from their hat. Equal parts collage and motion graphics, the video effortlessly swims from one visual aesthetic to another. Animated cityscapes and wildlife give way to retro images of the quintessential American family from the golden age of TV, huddled around the tube in true 1950’s fashion. From there it morphs into a scrapbook of familiar faces, some more infamous than the others. Mao, Geurva, Stalin, even Washington the dollar bill has a presence. All the while the words “Happy End Of The World” continue to make their way across the screen. Though the song is wistful and soothing, the message of the video is a more dystopian tilt. The brilliance of DRUNKSOULS is their ability to really make an audience think, even if they are able to do so in a relaxing fashion.

We’re very pumped to be working with DRUNKSOULS once again to bring you this stunning new clip! You can contact Andy Gesner and the HIP Video Promo crew at (732)-613-1779, email us at info@HIPVideoPromo.com for more info. You can also visit www.DrunkSouls.com.