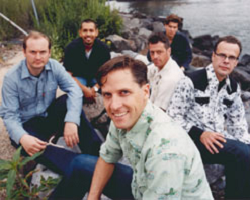 Before Calexico formed in 1996, Joey Burns and John Convertino met while playing in the band Giant Sand. Named for the California/Mexico border town, Calexico creates music that fuses everything from sparse California folk to Latin jazz to surf music to hallucinatory rock and roll. In 2003, they broke through with Feast Of Wire, and began nonstop touring, playing everywhere from Asia to Australia and New Zealand to Northern Europe… oh, and all around the US, sharing stages with the likes of James Mercer and M Ward. Following the EP In The Reins, a collaboration with Sam Beam of Iron & Wine, they returned with Garden Ruin in 2006. For the first time, the band became overtly topical, addressing environmental and political problems; if prior Calexico releases brought Americans into the desert, Garden Ruin is the recording that brings the desert to America.

That spring, we teamed up with Calexico and the fine folk at Touch and Go Records to promote their “Cruel” video. The lead single from Garden Ruin, “Cruel” was a stark yet radiant piece of folk-rock. As the band plays in a mysterious abandoned, decaying structure, a ghost haunts the halls – though they don’t see her. Everything crumbles around them, but this is no apocalypse – it’s graceful, somehow serene.

More than a decade later, Calexico continues to release inventive, creative albums showcasing their sound. Most recently, in 2019, they released Years to Burn with Iron & Wine on Sub Pop. Check out the visual for “Midnight Sun” below!