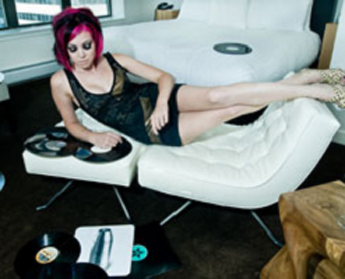 Think of the music industry as a giant, fierce wave; newcomers either learn to ride the tide or get trapped in the currents. It takes a lot of innovation, adaptation, and perseverance to stand out, which is something Dani Deahl has perfected. She is always at the forefront of industry change and artist discovery, reports on the intersection of music and technology for The Verge, leads the YouTube series The Future of Music, and is the Vice President of the Chicago chapter of the Recording Academy. Oh, and did we mention that she is a prominent DJ that blends trap and house to create a future-bass set that overflows with immense energy?

As Diplo said, “She’s awesome.” Deahl has played on the stages of respected music festivals like Electric Daisy Carnival and Lollapalooza and has been direct support for DJs like Steve Aoki and Alison Wonderland. As a woman in a heavily male-dominated field, she is an expert and activist on gender equality in music and marketing. Her resume puts all of us to shame.

Deahl hit it off with Diplo one night in Vegas and took a picture together to commemorate the moment. The picture ended up in her inbox the next morning with the subject line “Diplo Hates You”, birthing the title of her next song. “Diplo Hates You (feat. Oh Snap!)” begins with a corporate looking Dani and Oh Snap! entering an intimidating conference where Diplo himself is at the head of the table, judging her entire presentation. She becomes fed up after Diplo ruins her display and blows a whistle twice, turning the entire office into a full-on party, complete with Diplo in a gorilla suit, Pete Wentz in a space helmet, confetti, lights and one of the meanest house tracks that took over 2012.

Electronic music serves as a safe place and inspiration for freedom of expression as ravers lose themselves in the music and energy. “Thunderbolt” by Dani Deahl and Animale portrays one-way people let loose to their music: dancing. A sole girl dances in the rain, joined by two masked rabbits who also move to the beat. Eventually, the party expands into a giant energetic crowd, showcasing two different elements: water and fire. Deahl and Animale end up being the faces behind the masked animals, hiding in plain sight.