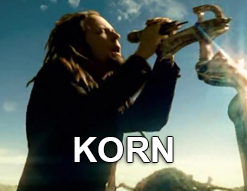 In the early 90s, no one had heard of nu-metal. Korn’s 1993 demo Neidermeyer’s Mind had a limited printing and wasn’t receive well by fans or critics – but the next year, their self-titled album peaked at number one on the Heatseekers Albums chart and was eventually certified two times platinum by the RIAA. Taking influence from everyone from Red Hot Chili Peppers to Rage Against the Machine to Dr. Dre, Korn soon exploded, and they haven’t stopped since. Two decades in to their career, they’ve released twelve studio albums and three live albums, and sold over 35 million records worldwide, as well as won two Grammy Awards (in 2000, “Freak on a Leash” won for Best Short Form Music Video and in 2003, “Here to Stay” won for Best Metal Performance).

In 2005, Korn released their seventh studio album (and first without Brian Welch), See You on the Other Side as their first on Virgin Records. The album debuted (and peaked) at Number 3 on the Billboard 200 and was certified as platinum the following year. “Coming Undone” was the album’s most successful single, and reached number four on the Billboard Mainstream Rock Songs chart and number fourteen on the Alternative Songs chart. They’ve performed it on TV (including Jimmy Kimmel Live and Spike TV’s Scream Awards) and it’s a favorite in their live set.

And Korn’s live set is not one to be missed. They even documented their time on the 2006 Family Values Tour (where they were joined by the likes of Deftones, Flyleaf, and Stone Sour) with a CD and DVD release, Family Values Tour 2006. The live DVD footage of “Coming Undone” is about as straightforward as it gets, as the band leave all frustrations behind and rock out.

To date, Korn have now released twelve studio albums (their first seven were all certified platinum, their eighth was certified gold); their most recent, 2016’s The Serenity of Suffering, peaked at number 4 on the US Billboard 200. Earlier this month, they played a trio of live shows to celebrate the twentieth anniversary of Follow the Leader, their third album (which has been certified five times platinum by the RIAA). Stay tuned to www.KornOfficial.com to see what they’re up to!

We’ve been big fans of Korn since long before we worked together, and we can’t wait to see what budding artist becomes the next break-out star. Do you think your video has what it takes to be the next worldwide smash hit? Get in touch with Andy Gesner and the rest of the HIP Video Promo team by giving us a call at (732)-613-1779 or emailing us at info@HIPVideoPromo.com.