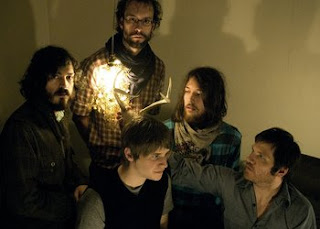 Fleet Foxes are coming back to the U.S. for a second round after playing a couple of shows with Wilco. Check out the tour dates, listed on the Subpop Records Web site here.

Best known for brushing the dust off of old muscial stylings, Fleet Foxes fills up its songs with baroque flourishes, sunny 60s pop, bluegrass and gospel. Fleet Foxes is what happens if you mix together the Beach Boys, a cabin in the Blue Ridge mountains, the epic sound of Led Zeppelin and sprinkle on a little bit of that odd, medieval spirituality animating bands like Dead Can Dance–Fleet Foxes even admit they believe has a music with a mystical undertone, with a power akin to belief in a deity, in the liner notes of their self-titled debut.
“Music is a weird and cosmic thing, it’s own strange religion for nonbelievers,” they write.
Probably because the band approaches music from this angle, they treat each song with a sacred sort of reverence, and they pay attention to every detail. Every composition is carefully constructed to give you chills, with harmonies, guitars, voices (and sometimes flute) weaving together in an intricate tapestry.

The video for “White Winter Hymnal” is located below.