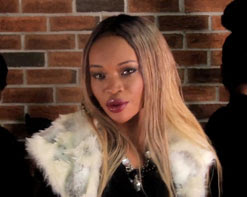 HIP Video Promo presents the introduction of the hottest new artist on the scene—Yemimah. With modern day comparisons to the likes of artists such as Ashanti and Rihanna, Yemimah blends a vast array of culture, society, and ethnic influences to her inspiring music. With a style that is like no other, she is fascinating the music scene with her newest video clip “Make Me Feel.” that blends R&B, dance, and pop genres to create the high-energy, yet laid back style of Yemimah.

Yemimah started to use her dynamic voice and charisma in Youtube posts, which helped gain fans both locally and nationally. This bright, young artist’s determination, drive, and never-give-up-attitude have landed her local performances at well known venues and a growing fanbase on the internet. Yemimah is a female artist on the rise who has decided to use her roots, culture, and ethnic language to create music that intertwines her background with some of her modern and favorite influences such as Keri Hilson and Beyonce—Yemimah hopes to incorporate old school J-Lo with a modern twist. However, she does just the thing here in her new single “Make Me Feel.”

“Make Me Feel” is a song that captures love at its finest moment. She has said “writing my own music is where I know I have to put my heart, soul, mind and emotions fully into it, which “MAKES ME FEEL”like the entire song is mine and I understand every bit of it, I am being true to myself during the writing, recording and performing process.” We watch as Yemimah captivates the audience with her haunting voice that incorporates her very own musical influences. Yemimah sets the tone in this inviting video clip as she expresses her feelings about love and the opposite sex. This catchy song is a delight and leaves us wanting more as Yemimah alluringly sings into the eyes of the camera. The background dancers within “Make Me Feel” add a nice touch to the ambience of the video, but Yemimah owns the song all on her very own. Click here for Yemimah’s full bio.