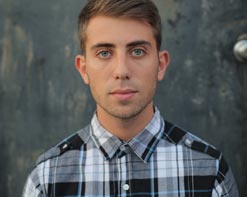 “If you can make it here, you can make it anywhere,” sang Frank Sinatra about New York City, a town littered with hyper-competitive creators and the most fastidious consumers of culture. Indeed, New York City is where people come to be the best at their craft. It is here, where another New Jersey native, has crossed the Hudson, honed his artistry, and become enmeshed in the musical fabric of New York. Twenty-three year old Jenaux (Eugene Veltman) has been composing, producing, and performing electronic dance music for six years. His hard work and talent have made him a mainstay in New York’s hottest nightclubs. At a time when electronic dance music is exploding on a global level, two of the genre’s most beloved clubs, Pacha and Finale, have named Jenaux a resident DJ, as they know he can stand beside icons and thoroughly entertain their dance-thirsty crowds.

Aside from sharing the stage with some of the most beloved acts in EDM including Porter Robinson, Zedd, Laidback Luke, and Knife Party, Jenaux has performed at a myriad of notable venues including New York’s Webster Hall and Roseland Ballroom, Boston’s Prime, and Trenton’s Sun National Bank Center for DayGlow Festival.

As Jenaux’s live performances have taken flight, his original productions have begun to make undeniable waves in the EDM community. His newest single, “Renegades,” finds Jenaux collaborating with vocalist Pia Toscano on a track that is propulsive and driving, but also finds the right moments to lay low and the right times to explode with energy.

The beautiful new video for “Renegades” places this east coast guy directly in the middle of a west coast thriller! As Pia serenades the camera from high atop the city landscape, Jeanux and his female companion cruise out of the streets of downtown LA to the picturesque Pacific Coast Highway in Malibu and begin a string of heists from the palatial palaces on the beach and in the hills. Their motivation is decidedly more complex than simple thievery as they fill their bags to the brim. Their ultimate motivation is revealed, but we won’t spoil it for you.

All of us here at HIP Video Promo are incredibly pleased to be working with another spectacular New Jersey native who has made the Garden State proud. His “Renegade” video is a thing of beauty that we encourage you to include in all of your video programming! Please don’t be shy about letting us know what we can do here to make that happen! Please contact Andy Gesner and the HIP Video Promo team at (732)-613-1779 or email us at info@HIPVideoPromo.com for more info. You can also visit www.EnhancedMusic.com.