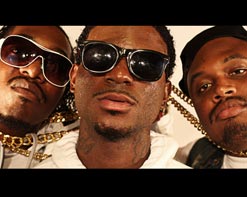 Prior to donning the King James III moniker, the members of Christ Gang churned out hit songs that not only stuck to the ears of listeners, but also celebrated their devotion to a higher power. Clear eyed and on point, they rebranded themselves as King James III and as a part of the NMG Productions team they’ve come out of the gate on fire.

What separates Billboard Charting King James III from many of their inspirational hip hop contemporaries is that while they are Christ-mentored, their message and delivery is not white-washed and patronizing. They inject their music with a real-life approach and don’t pretend to be saints who do no wrong. They talk openly of their struggles and difficulties, but the key part of their message is that they know their lives are a work in progress and they are always striving to live a life of Christ, even with all of the ups and downs.

This kind of honesty connects with listeners on a cerebral and spiritual level, and the new single for “Let It Go” is an honest examination of the emotions involved with finding the strength to make changes and to get out of a bad situation. King James III has collaborated with the remarkable Sha Sha Jones for this new single. Jones was responsible for the #1 hit “The One” by Tamar Braxton, and most recently the radio hit “MIA” featuring Wale, Omarion and many others. Her soulful vocals are a perfect contrast to the edgier approach of the King James III sound.

In the new video for “Let It Go” the group puts a crumbling relationship front and center. Mistrust, cheating, lies and all of the other hallmarks are present as loyalties are brought into doubt. As is the case with many relationships, it’s not just a matter of right or wrong, but a balance of what we know. The overarching theme is not about casting blame or judgment, but rather finding the courage to walk away from a bad situation and finding peace in their lives and in their hearts. Ultimately they know they can’t always do it alone, and their faith in Christ is a constant guiding light to achieve that.

We’re very excited to be working with NMG Productions to bring you this powerful and insightful new clip. The crossover appeal is huge for both Christian and secular markets, so we are confident there is a little bit for everyone. Please contact Andy Gesner and the HIP Video Promo crew at (732)-613-1779 or email us at info@HIPVideoPromo.com . You can also visit www.BigTopEntertainmentLLC.com.