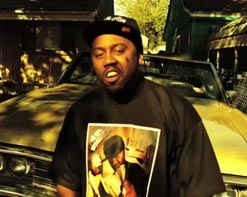 Sacramento, or Sactown for those in the know, is a city that nobody should overlook. Although their regional neighbors of San Francisco, Oakland, and San Jose often attract more attention, Sacramento is the city known as America’s Most Diverse City because it takes the best of everything around and makes them it’s own. Front and center is the blossoming music scene, and the artists that provide the heartbeat behind it. Enter
Lace Leno and his brand new video for “Do’n What I Feel Like!”

Lace Leno is an artist who has proved to be a force to be reckoned with. His grind is unstoppable, with his versatile rap style and vivid video production. He’s been branding himself with a work either that is out of this world, not just as an artist, but as the CEO of Undaturf Muzik & Undaturf TV. With such a strong emphasis on his visuals, Lace Leno has set a high bar for his new music video “Do’n What I Feel Like.” As expected, he knocks it out of the park.

The “Do’n What I Feel Like” video is a straight up banger that celebrates the vibrant city life, the hustle of the music scene and some of the finest ladies of the city of Sacramento. Don’t let it’s small city reputation fool you, Sacramento is bursting at the seams with action. Lace Leno plays to the camera with his crew, each time with the group growing larger and in a clever bit of visuals a different colored Lace Leno t-shirt adorns each scene. It’s classic and refined, and it’s everything you could possibly want out of a music video!

We’re psyched to be working with Lace Leno to bring you his exceptional new video and introduce you to a fantastic artist. Please contact Andy Gesner and the HIP Video Promo staff at (732)-613-1779 or e-mail us at info@HIPVideoPromo.com for more info. You can also visit www.Facebook.com/LACELENO/.