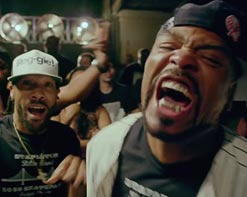 Fresh off the release of his critically acclaimed album, The Meth Lab, Method Man has teamed up with Complex to unveil the official music video for his single “Straight Gutta.” Redman, Hanz On and Streetlife join Wu-Tang Clan’s breakout member in the gritty music video shot on the streets of Staten Island. Mef heads will notice a nod to Wu’s “Protect Ya Neck” with one of the locations set in the Park Hill projects. Directed by The Last American B-Boy, the video takes it back to the streets and revives the timeless feeling of pure Hip-Hop.

“In the Last American Bboy-directed video, Meth gathers his crew in the spot, where they shine the spotlight on the ferocious raps throughout the song, with a cypher-like feel as they fire off the rhymes. In fact, after all of these years Meth and Red are still proving that they got it with the best of them in the game, and that is never more prevalent than in this video.” – Complex

All of us here at HIP are very excited to be working with a legend like Method Man and are grateful to the team at Tommy Boy Entertainment for bringing us on board! If you’d like more information on Method Man and The Meth Lab please contact Andy Gesner at (732)-613-1779 or email us at info@HIPVideoPromo.com for more info. You can also visit www.TommyBoy.com/.