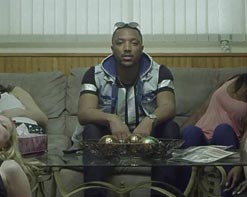 Who doesn’t love a good trip down memory lane? When most of us are children we are so anxious to grow up and become adults. Yet, once that happens, it’s very common to look in the rearview and wonder where that innocence of our youth went. For an older generation it was Leave It To Beaver. For Philly’s newest emcee, Nave, it’s all about The Cosby Show. His new single “Cosby Kids” reflects whimsically about young love and a more innocent time, and it comes with a music video that feels as much nostalgic as it does contemporary.

Nave resides in Philadelphia, and says his home base is The Batcave. It’s appropriate because Nave has hit the city’s music scene and nightlife like a superhero after dark. His combination of smooth rhymes and blistering intellect has allowed him to stand above the noise in a crowded scene. He’s prepping his new full length album, Espresso, which is sure to make waves and move mountains, but in the meantime he’s giving us a taste of the best he has to offer with his new single “Cosby Kids.”

The video for “Cosby Kids” will have even the toughest person getting a little soft for their youth. The video revolves around a young Nave sitting on the family couch with his family at his side, with that week’s episode of The Cosby Show on the TV. Smiling and laughing, it was a wonderful time. Outside he was chasing young love, riding bikes and hitting the playground with a young girl. Interspersed with that footage are shots of an adult Nave and his boyhood crush all grown up in a distinctly more serious tone. They’re both surrounded by a worn down crew of ladies, who represent an acknowledgment of the current controversy surrounding Bill Cosby. Holistically, the video represents the simplicity of childhood and how things change when we get older but the girls also represent how Nave’s memories of Cosby are tainted. And ultimately that’s the risk of romanticizing the past, knowing that things may not have been quite what they seemed.

We’re psyched to be working with Nave to bring you his exceptional new video and introduce you to a fantastic artist. Please contact Andy Gesner and the HIP Video Promo staff at (732)-613-1779 or info@HIPVideoPromo.com . You can also visit www.SayNave.com/ for more info on Nave.