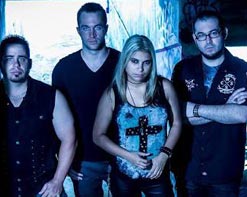 The state of Florida is generally associated with endless beaches, beautiful sunshine, and for being an overall vacation paradise. Don’t tell that to Oblivious Signal, though. It’s also one of the most fertile ground for some of the best hard rock and heavy metal bands that this country has to offer. Bands like Alter Bridge, Iced Earth, Underoath, and many others call the Sunshine State home. Oblivious Signal is carrying that flag and leading the charge from the peninsula to the north with their new single “Crash”!

This female fronted act has been a self-made act since their inception. Their self-produced releases and DIY marketing techniques keep fans continually coming back, landing them at #1 on the Reverbnation metal charts for the entire state of Florida. They’ve also played major events such as Warped Tour, Hard Rock Rising, and multiple festivals as well as shared the stage with multiple national acts. Now that they’ve seemingly outgrown their  home state the band has teamed up with Pavement Entertainment to bring their new album Exordium to a wider audience. The first single is the emotionally charged and blood boiling new single called “Crash,” and we’re certain it will get your adrenaline pumping!

The video for “Crash” revolves around a seemingly simple group of casual party goers. Just a bonfire, some moonlight, a few red cups, and a good vibe all around. The mood is lighthearted until the minds of a couple in attendance start to stray and the natural instinct of jealousy and insecurity creep into the picture. In these weak moments bad decisions are made and the results can be costly, not just for the couple in question, but for all of their friends and families.

Once again, Pavement Entertainment has found a gem and we’re psyched to bring this new video to you and your viewers! It’d be our great pleasure to get you some copies of Exordium, or to get you out to see the band on their current US tour. Please do get in touch to let us know! You can contact Andy Gesner and the HIP Video Promo team at (732)-613-1779 or email us at info@HIPVideoPromo.com . You can also visit www.PavementMusic.com/ for more info on Oblivious Signal.