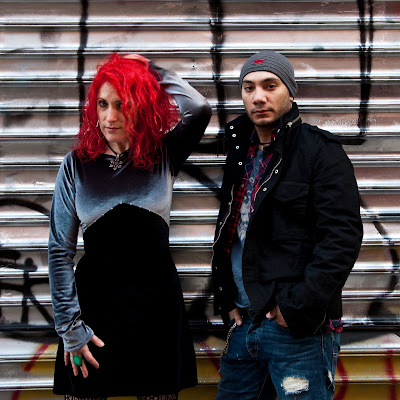 Founder, frontwoman and lead guitarist Samantha is a refugee from the folkie troubadour circuit, where every year she drove 50,000 miles by herself, playing over 200 gigs nationwide until, in 2008, she traded in her Martin for a Telecaster and turned it UP. Living in Los Angeles at the time, Shaber founded the happy problem as a cross between the snarky aggression of Green Day and the feminine power of No Doubt, recording an EP with players from Gnarls Barkley and The Fray. Moving back in her hometown NYC, Sam put together a new army of darkness, with bassist Joe Nerve, formerly of Guns N’ Roses offshoot Bumblefoot, and powerful drummer Tony Cortes, formerly from heavy rock outfit Hybrid Dawn. The result is their brand new full-length follow-up, Head Case, recorded in the murky Gowanus section of Brooklyn and self-produced by Shaber. The album has 9 original songs and a unique indiepunk take on 2 covers, “Material Girl” and the unexpected Petula Clark classic, “Downtown.” It has received early rave reviews on iTunes and commercial airplay on WDHA 105.5-fm among others.

the happy problem’s music has been featured on hit shows such as “Greek,” “Privileged,” “Teen Mom,” “16 and Pregnant,” “Engaged and Underage,” and many more. Singer Sam is also the voice behind the song “Harder Deeper Faster,” featured during an Olivia Wilde striptease scene in the upcoming Weinstein film BUTTER, starring Hugh Jackman, while also duetting with Molly Ringwald on the title theme to ABC Family’s hit show “Secret Life of the American Teenager.” the happy problem are now busy scheduling their summer tour to promote their new record.

Check out their artist page here!