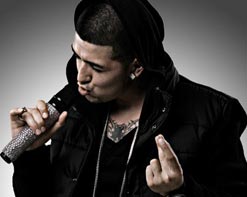 At first glance, one is not able to peg Prince AJ. A second or third glance might not even do the trick. In fact, AJ has a hard time defining his own self. One thing he has not done is put himself in a box. With his radio single debut, “Shawty Throw It Up,” all that is needed to know is that he is one gifted guy with many talents.

He started young and hasn’t looked back since, racking up accolades and notoriety in his hometown of Houston, TX. Being raised by a single mother has taught him the value of working hard, whether it be in his music or when contributing his time to Alicia Keys’ Keep-A-Child Alive Campaign, an AIDS awareness program to raise funds for afflicted families in Africa.

Not only does Prince AJ work hard, but he parties hard, too. Need proof? For the new video “Shawty Throw It Up,” Prince AJ enlists the help of his buddy Paul Wall and they absolutely bring it to another level. The energy is palpable, the women are beautiful, the libations are flowing freely, and AJ and Paul are leading this party. It’s the kind of video that no matter what hour of the day it is, you’ll want to get on your feet and move. And like trying to peg Prince AJ, a few looks just aren’t enough as you’ll want to keep coming back for more!

It’s our distinct pleasure to be working with Prince AJ and helping to spread the word about his killer sound! Please contact Andy Gesner and the HIP Video Promo crew at (732)-613-1779, email us at info@HIPVideoPromo.com . You can also visit www.PrinceAJ.com/ for more info on Prince AJ.