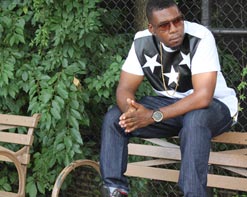 Ray Sytes, hailing from Queens, NYC, has brought his unique flavor of Caribbean-influenced hip-hop/dancehall to the US with his exceptional release Welcome 2 Guyana. His previous clips for songs like “I Wonder,” “Can’t Back Down,” and “Let It Go” were all dazzling displays of his knack for combining his roots and dreams. He’s also not afraid to throw a curveball into the mix, like he did with his reinterpretation of the cult classic, “Jukebox Hero.” Today, we are excited to bring you what might be his most fearless and direct effort to reveal Ray Sytes, “Mi Wan Burn.”

The conversation about the legalization of marijuana has changed substantially in the past several years. What once was a taboo subject that could easily land someone in hot water for proclaiming their support is now a topic that is openly discussed, legalized, and even celebrated in many parts of the country. As the public opinion comes around, Ray Sytes wants to be the one to lead the charge in celebration. He’s a man who knows his herb, and he’s happy to share his good feelings with friends and fans alike.

The setting for the video is a clever workaround to the existing stigma that still exists about the green. Rather than push the limit with a gratuitous amount of imagery, Ray and co. have set up shop in a hookah lounge for this party, which are legal in all 50 states! That’s not to say that Ray and his crew aren’t sampling the inventory and having a good time doing so. It’s not just about having a good time, though, it’s also about calling attention to the double standard and absurdity that exists with those who will go to such great lengths to punish those enjoying a good time with the full weight of the law, but will then turn around and find the same enjoyment themselves. Everybody’s doing it, so why are we hiding behind stigmas and outdated perspectives? It’s a question worth contemplating, and in the meantime, let’s burn!

We’re very excited to be working with Ray once again and helping to spread the word about his excellent new video “Mi Wan Burn” and his killer album Welcome 2 Guyana! Please contact Andy Gesner and the HIP Video Promo crew at (732)-613-1779, email us at info@HIPVideoPromo.com . You can also visit www.Facebook.com/SytesMusic for more info on Ray Sytes.