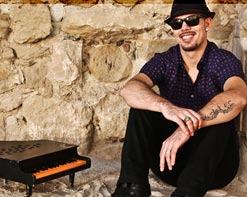 We’re all very excited to once again bring you the sights and sounds of an artist of true global musical royalty. It’s been several years, but we’ve all been keeping tabs on Salvador Santana, son of the legendary Carlos Santana, as he’s been not only been meticulously crafting his own sound, but also actively taking a hands-on role with his father’s continuing legacy. The new single for “I Don’t Want It To End,” from his new album, Fantasy Reality, radiates good vibes and is a showcase for the fusion sound of Salvador Santana and his band.

While his father has been setting the world ablaze with this guitar skills for the past half century, Salvador has established himself as an equally proficient and gifted player on the keyboards. Salvador just wrapped-up a run as Santana’s opening act, playing giant outdoor venues, with Carlos joining Salvador’s band on-stage every night to play alongside him! His chops are unquestionably some of the tightest around, and his style is a blend of pop music and his cultural heritage. Sounds familiar, right?

For the new video “I Don’t Want It To End,” we see Salvador and his band straight up BRING IT to a packed house of eager fans. The club atmosphere is steamy and full of adrenaline. The style has a vintage look with 70’s styled lighting and wardrobe, and carries over the feel-good party experience of a bygone era, which is something we so sorely need now. If you have a pulse you will feel the vibes radiating from this video, which is guaranteed to get a room moving.

Please contact Andy Gesner and the HIP Video Promo team at (732)-613-1779 or email us at info@HIPVideoPromo.com for more info.

Salvador Santana "I Don’t Want It To End"