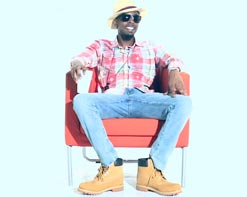 Though small in stature, the country of Jamaica and the music scene it fosters is one of the most inspirational and prolific in the world. We all know the Marley name, but contemporary artists like Shaggy, Sean Paul, Toots Hibbert, and Sean Kingston have all been making huge waves for years. To that list, we’d like to add Sly Rankin, an artist whose crossover skills and giant persona are bound to make him a force to be reckoned with. With his new single “Debo,” he gives us a full taste of what has made him one of the hottest acts in Jamaica, and soon to be Stateside and more!

After making a name for himself with his collaborative project, Gangsta Colony, Sly Rankin is stepping out on his own. He has had tracks featured on a plethora of MTV and BET reality shows or TV programs, who have recognized his talents for writing bombastic club and radio-ready jams. Now that he’s gone solo he’s immersed himself in the soundtrack for his new project Jamaica Hip Hop, a documentary looking into the underground Jamaican hip hop scene. Earlier singles such as “Keep Coming” and “Dunce Anthem” were met with acclaim, and it’s with the new single for “Debo” which might be the best one yet.

The “Debo” video is a slick presentation filled with sexiness, sass, and a crew of dancers that keep the pace moving. The setting is nothing more than a white soundstage with lights illuminating Sly and his pals. Of course, the object of his desire is there as well in the form of an absolutely stunning beauty in a sexy American flag patterned bikini. Sly and his girl leave the action to his crew as they spin and groove their way around the stage. Between her sexy and his swag, there’s really nothing left to prove!

Big ups to Sly Rankin and his team for delivering such a killer video! If there is anything we can do here at HIP to get this into your programming, please don’t hesitate to let us know! You can contact Andy Gesner and the HIP Video Promo team at (732)-613-1779 or email at info@HIPVideoPromo.com .