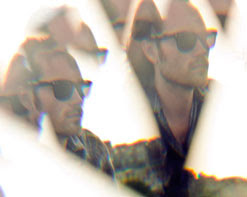 Dusted frontman Brian Borcherdt sure knows how to get our attention. And he’s also confident that once he has it, we’re going to like what we hear. After all, you don’t name your other band Holy Fuck without having the goods to back it up, and on that end the band never failed to deliver. Over the course of six years, Holy Fuck has toured relentlessly, building up a loyal fanbase, an acclaimed catalog, and even being included in the hit TV show Breaking Bad. He also founded the Canadian label Dependent Music, which was home to some of Canada’s most sought after releases.

Now emerging from the intertwining cables and broken drum machines of Holy Fuck, Borcherdt brings us Dusted, a project that fulfills his desire to explore a different sound. He teamed up with producer Leon Taheny, known for working on Final Fantasy, Rituals, and Bruce Peninsula, to record the new album Total Dust in a converted garage. Total Dust strips down the mood of past musical influences and presents listeners with a collection of songs that are filled with string arrangements, minimal guitar feedback, and occasional percussion instrument fills. Since their stage performance debut earlier in the spring, Dusted has performed with label mates Deerhoof and of Montreal, and while back in Toronto, they have performed at house parties with fellow friends Army Girls and Odonis Odonis.

It is with their debut video for “Into the Atmosphere” that we can get a glimpse of all that these rising stars have to offer. The video contains a haunting backdrop of a cloudy sky, in which we watch as Dusted performs on a wanton beach. We are introduced to the image of a classy microphone where Borcherdt sings a heartfelt ballad to the sky. Directors Aaron Kopf and Paul Gerretsen present us with scenes of sultry guitars that create a certain vibe that transcends human beings. The fact that the atmosphere is the main focus of the video creates an idea of how small we really are in comparison to the size of the world, and it is with the song “Into the Atmosphere” that we can truly understand the power of the universe and all that it has in store for us.
https://www.hipvideopromo.com/clients/dusted.php