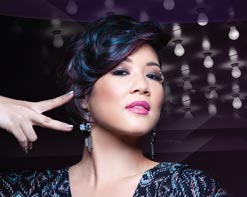 Born and raised in Jamaica, Tessanne Chin took the U.S. and Canada by storm when she was introduced on Season 5 of The Voice. Her soulful voice, her style, her attitude, and of course her Caribbean flair are undeniable. Tessanne beat thousands of contestants and was chosen by the audience and crowned the Season 5 winner of The Voice. Since then, Tessanne has become a universal star, with die-hard fans throughout the Caribbean islands and gaining hundreds of thousands of fans across North America. For an artist with such a meteoric rise, it’s only appropriate that her newest single and video be called “Fire.” Get ready, things are about to get hot in here!

Before Tessanne’s fame on The Voice, she already had invaluable experience and a sneak peak of stardom. Chosen as a back up singer to the legendary Jimmy Cli, she toured with the band for three years. Shortly after, Tessanne released her first solo hit, “Hideaway”, topping the Jamaican charts and launching her career in the Caribbean. With the direction of close family friend, international reggae pop sensation, Shaggy, Tessanne finally auditioned for The Voice. With Adam Levine as her coach, Tessanne amazed the audience with her performances of numerous cover hits. Two of Tessanne’s renditions, Simon & Garfunkel’s “Bridge Over Troubled Water” and Whitney Houston’s “I Have Nothing”, shot to #1 on the iTunes overall Top Song Chart. This was a historical moment, as it was the first #1 hit for the critically acclaimed hit television show.

Her new single, “Fire,” has all of the hallmarks that has made her a star. The music has a groove and a swagger to it that will immediately have you tapping your feet and swiveling your head to the rhythm. Of course, it’s all brought over the top by Tessanne’s brilliant vocals and dominant performance. For the “Fire” video, the camera follows Tessanne throughout a palatial estate as she floats amongst a couple that has the man learning the hard way that he is “playing with fire.” A healthy dose of performance clips are worked in, each time Tessanne is front and center, calling the shots and leading the charge. It’s infectious from front to start and a brilliant showcasing of her endless talents.

All of us here at HIP Video Promo are thrilled to be working Tessanne Chin and her team to bring you this brilliant new video. We’re here to hook you up with anything you may need to get this video into your programming, so please don’t hesitate to get in touch. Please contact Andy Gesner and the HIP Video Promo crew at (732)-613-1779 or email us at info@HIPVideoPromo.com for more info. You can also visit www.OfficialTessanneChin.com.