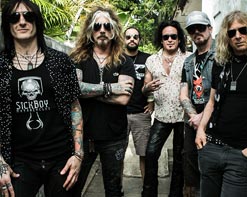 The Dead Daisies have proven to be a prolific bunch when it comes to music videos, and in each effort they put a different spin. “Lock ‘n’ Load” was a cinematic approach with an in depth storyline. “Washington” was a scorching live performance, while “Face I Love” was a composite of cutting edge technology and fan participation. Most recently, “Angel In Your Eyes” and “Midnight Moses” were tour-centric videos that highlighted their groundbreaking trips to the newly revived island of Cuba. Curiously enough, with all of the candid shots and live shots, the Daisies themselves have yet to take center frame and participate in the production of a video. With the raucous new clip for “Mexico,” that all changes and they bring the party front and center.

The Cuba visit, the new single “Mexico,” and the new release Revolución coming on July 31st has the Daisies taking quite a Latin tilt these days. But that doesn’t mean they’re not still the globe trotting rock and roll warriors we’ve come to expect. They’re about to embark on a US tour with metal legends Whitesnake, then heading to Australia for another run in support of KISS, and then linking up with Whitesnake again over in Europe for more dates before finishing off the year with a string of dates in the UK. Like we said, globe trotting rock and rollers! For “Mexico,” they’ve hopped the border once again, taking the party south of the border to the song’s namesake and leaving no stone (or stripper) unturned!

Led by new frontman John Corabi, the Daisies crew consisting of Richard Fortus, Dizzy Reed, Marco Mendoza, and Brian Tichy roll into a Mexican strip club with reckless abandon. Though they try to play it cool at the bar with a few drinks at first, the ladies onstage are a little too hot to overlook and sure enough the band drops down front and center to enjoy the show. It’s not long until it devolves into a scene of playful debauchery, that is until the authorities show up and start slapping cuffs and hauling bodies out. Of course, even the hardened Mexican authorities can’t hold out and join the Daisies’ party. All’s well that ends well!

We’re pleased to once again be working with The Dead Daisies and the Spitfire crew to keep bringing you dynamic content from these classic rock titans. Please do get in touch if you’d like to check the band out on tour this summer in a market near you or link up with the band for an interview. Please contact Andy Gesner and the HIP Video Promo crew at (732)-613-1779 or e-mail us at info@HIPVideoPromo.com . You can also visit www.TheDeadDaisies.com/ for more info.

The Dead Daisies "With You And I"

Artist: THE DEAD DAISIES Label: SPITFIRE MUSIC Video: “WITH YOU AND I” Director: Made by […]