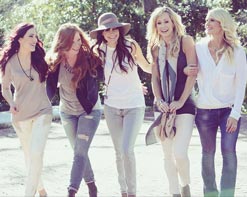 For the five music-loving members of The Mrs., listening to contemporary music caused mixed emotions. Amid tales of teenage heartbreak and wild nights at the club, there was no voice speaking to their lives and the important issues they encounter. So, like talented and confident women do, they decided to sing it themselves!

The Mrs., an all-female rock band in their 30s and 40s, is on a mission to not only create music women can relate to, but to change the way women see themselves. They rightfully believe that their issues aren’t any less burning and their adventures are just as song-worthy. With their hit single “You Told Me”, The Mrs. have struck a chord with audiences, evidenced by the fact that “You Told Me” continues at #1 in Mediabase A/C independent artist rankings. Their message is resonating, and both industry and fans alike are taking notice.

The video for “You Told Me” is a fun and heartfelt video that follows generations of mothers and daughters as they grow throughout the years. It begins on a farmstead with mail being picked up by the Pony Express and transitions through time up to the communication technology of tomorrow. The times may change, but the bond between a mother and daughter is something that is so unique and special that it remains strong no matter what decade or century they’re living in.

Throughout the clip, The Mrs. perform on a brightly lit stage with all white instruments. These five confident women look chic and beautiful as they provide a terrific soundtrack to this touching video. They’re speaking from the heart, and as mothers and daughters themselves, their love and passion for the song’s message shows in their performance.