a memorable dose of caffeine and sugar your brain has been begging for… Larissa Ness! 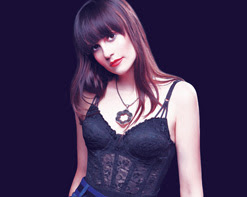 Larissa Ness combines her classically trained musical talents with foreign tongues, synthesizers, and a bit of dystopia in her latest video for “Let It Go,” a memorable dose of caffeine and sugar your brain has been begging for.

Larissa Ness has been destined to be the “IT” girl from the start, sitting down to play the piano at age 3. Since then she’s released a volume of albums across the genres of jazz, latin, hip hop, and pop in her quest to take over the world. “Je T’aime,” the first single from her debut album Texture Vision, appeared on MTV, VH-1, SPK, NICK, FXNC, SciFi, and ENT as part of the B&H Music Stores commercials, featured in the New York independent film Dykeotomies, and was aired on Austin’s biggest rock station 101-X. Larissa also penned the theme song for the upcoming indie flick Lost In Sunshine. The multifaceted diva didn’t stop there, as she released I’ve Found You, a jazzy Latin flavored EP that featured world renown Latin groups, Cienfuegos and the Grammy-nominated band (and HIP alumni), Grupo Fantasma as well as Hello, a pop record featuring rapper Ray C, which received radio play in the US, England, France, and Germany. She’s performed at the Playboy Mansion and had shared the stage with celebrities like John Secada, Dennis Quaid, and Teddy Mulet of the Miami Sound Machine. To top it off she’s also the singer in the Wii game All Star Cheer Squad 2.

Check out her full bio HERE on the HIP Video website!

Her fantastic music video for “Let It Go” is coming VERY SOON!