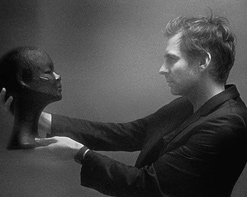 7fields is a Berlin-based electronic-folk artist. Behind his sound is a man possessing the unique ´nerd´ gene and who is driven by his urge of musical discovery. Rather than someone who is new to the business, Wolfgang Schrödl is a seasoned musician and composer who looks back on a successful past. He was head of the synthie-pop band Liquido, known for the world-wide and platinum hit “Narcotic”. After the end of Liquido, Schrödl embarked on a different path that lead him back home to himself. The name ´7fields´ represents this journey, indirectly translated from ´Sieben Morgen´, the district of his childhood.

7fields is Schrödl´s first solo project. When asked about the timing and direction of this new project, he explains: “After years of working in bands, it was about time to focus on my own ideas that reflect where I’m standing now in my life.“

Accompanying Schrödl’s vocals, one might suspect that an entire band is supporting him. In reality, he plays virtually all the instruments himself – a musical group consisting of alter egos. “I compose and pre-produce at home, trying out a lot at my own pace, mostly in the dead of night“, says Schrödl. After he initially creates his compositions, he then collaborates with the producer Giovanni Nicoletta (whose work includes that of Apparat, Dieter Meier and Miss Kenichi) at the Chez Chérie Studio Berlin. This creative space has been utilized by many respected contemporaries such as José Gonzáles, The Beatsteaks, T.Raumschmiere and Tocotronic. It is here that the studio’s local resident and producer ´Nackt´ (Apparat, Warren Suicide, Dieter Meier) has also brought his own creative touches and expertise to 7fields’ recordings.

7fields’ first video release is “Good to See You“, it´s an indie-folk piece, starting intimate and vulnerable, just to merge into an hypnotic and monotone elegy. A song that opposes standard composition, developing atmosphere rather than representing familiar pop structure.

“Music that means something to me does not follow trends. It tells stories and articulates aspirations. Often concerning things in the past, sometimes longings about what is to come. And the sound must condense and translate those thoughts into something tangible“, Schrödl says about his approach, as “Good To See You“ illustrates. The intense black and white video for the single was shot by the young, emerging Berlin artist named ´I am Johannes´, who created a close-distance collage featuring Berlin´s local ballet dancer Lia Kemendi and Schrödl himself.

It’s our distinct pleasure to have the opportunity to work with such a unique artist unafraid to mix music and art together. Please contact Andy Gesner and the HIP Video Promo team at (732)-613-1779, email us at info@HIPVideoPromo.com. You can also visit www.7fieldsMusic.com or www.MotorMusic.de for more info on 7fields.