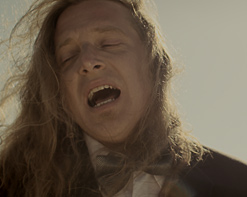 Aaron Orbit, hailing from the bucolic, bohemian, seaside paradise of Ventura, CA, has already established himself on the music video landscape. With his previous video for “Prove Me Wrong,” he showed his ability to captivate the camera while offering up compelling, cinematic visuals. While “Prove Me Wrong” was by and large a small scale production, his brand new video for “Agua Mala” is a whole other experience in itself with its scope and sweeping grandeur.

Seeing an independent artist like Aaron Orbit singlehandedly accomplish such a stellar result shouldn’t really come as a surprise. Prior to striking out on his own, Aaron toured the country, played thousands of shows, and played the major label game with his previous acts 8STOPS7 and Le Meu Le Purr. For all of the miles under his belt as a part of a band, it wasn’t until a series of sudden, dramatic changes in his personal and professional life that he was able to find the true voice that had been hiding inside
all along.

The new single for “Agua Mala,” which translates to “bad water,” reveals itself to be a highly personal song. The differences in the optimistic, uplifting choruses, and the minor, menacing verses is indicative of the central message of the song: being determined to make change for the better…just not right now.

The “Agua Mala” video revolves around Aaron traversing the last place on earth where one would want to find the “bad water”…the hot, humid, arid desert. Donned in a full suit, Aaron wanders aimlessly across the sand with the sun blazing down from above. Assorted shots mixed in include black and white cuts of Aaron immersed underwater and the propulsive beat being executed on a drum set.  Much like the theme of the song, however, the video is primarily an abundance of beautiful, vast shots of Aaron making his way across a seemingly never-ending landscape in search of something that just may not exist…

We’re super excited to be working with Aaron Orbit once again to bring you this well-rounded, thought-provoking video. For more information on this Aaron Orbit, please contact Andy Gesner and the HIP Video Promo staff at (732)-613-1779 or email us at info@HIPVideoPromo.com. You can also visit www.AaronOrbit.com for more info on Aaron Orbit.

For info about other Aaron Orbit music videos, click HERE