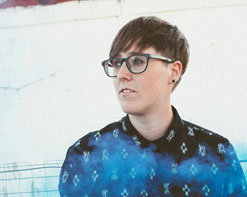 In 2009, Allison Weiss was a leader in blazing the trail of crowdfunding when she turned to the newly launched Kickstarter for her first full length LP. She met her goal in one day, tripled it in three days, and before she knew it she was a sort-of poster child for the new era of internet promotion.

What followed has been whirlwind ride of near non-stop touring, recording, and collaboration. Touring with artists like Laura Jane Grace, The Front Bottoms, Jenny Owen Youngs, Max Bemis (Say Anything), Slingshot Dakota, Chuck Ragan, Mal Blum and more raised her profile exponentially. She even supported the legendary Lou Reed during which she contributed back vocals to his band. Her releases included the critically acclaimed EPs, LPs, and even a Daytrotter split single with
Tegan & Sara.

Reaching into her deep well of friends and contacts, her newest album New Love was co-produced by Hellogoodbye’s Forrest Kline and Now, Now’s Bradley Hale. The album was released on 10/2 via SideOneDummy, and it’s the perfect fit, really. The SideOneDummy roster has always been one of the hardest working, most prolific communities in the modern music scene.  Her work ethic is a key component to her success, and in her new video “Who We Are,” Allison celebrates the art of the hustle in a different way.

The “Who We Are” video is an inspiring piece that shows the power of determination on multiple levels. Entirely based on the narrative, it tells the story of a young girl making in a traditionally boys world: football. She shows up early, stays late, and is the first to hit that sign up sheet for the team. Though they are skeptical at first, her determination, athleticism, and ability to take a hit and get right back up are all they need to see to embrace her as a part of the team. By the end of the video, the cuts, bruises, dirt, and smiles say everything that needs to be said.

We’re very fortunate and excited to be a part of the SideOneDummy Records team and Allison Weiss is just the first of many exceptional videos coming from their roster! If there is anything at all Allison Weiss or SideOneDummy related that we can do to help get this video into your programming, please don’t hesitate to get in touch and let us know! Contact Andy Gesner and the HIP Video Promo team at (732)-613-1779 or email us at info@HIPVideoPromo.com . You can also visit http://www.AllisonW.com/ and http://www.SideOneDummy.com/.