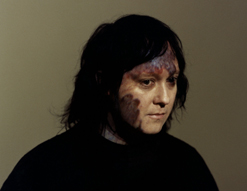 Hello music lovers, it’s Andy Gesner and the staff of HIP Video Promo bringing you a new video from one of the most musically innovative artists on the American musical landscape, Antony & The Johnsons. When the Wachowski Brothers needed a subversive liberation anthem to score the dance scene in V For Vendetta, they didn’t license a hardcore punk record. Instead, they chose a track by Antony & The Johnsons. The Wachowskis know what’s up: no contemporary singer communicates the beauty of resistance with more elegance or conviction than Antony Hegarty. “Bird Gehrl”, the song used in the movie, is a song of escape and transformation; it’s also achingly gorgeous. Hegarty and his band graced the movie with a song that seemed to focus the aspirations of its characters, and in the process, the band helped create indelible cinema.

Now the Wachowskis Brothers have returned the favor. The Matrix directors assembled a first-rate team to make a video for “Epilepsy Is Dancing”, the lead single from Antony & The Johnson’s hotly-anticipated Crying Light. Sean Dorsey, the artistic director of the Fresh Meat Productions dance troupe, has choreographed the clip with the characteristic balance of sensitivity and provocation that has won him two Isidora Duncan awards. Painters Tino Rodriguez and Virgo Paradiso created the fantastic sets and outrageous costumes. Red-hot cinematographers Chris Blasingame and Banker White have perfectly captured the wild color and chaotic motion of Rodriguez’s and Paradiso’s audacious art design. And the clip stars longtime Hegarty collaborator Johanna Constantine in the role of an ordinary woman who collapses slips into a reverie – or possibly a glipse of the “other side” – after encountering a faun in a city alley.

The clip suits the song – and the new album – perfectly. The Crying Light is concerned with the tenuous border between life and death and the netherworld that surrounds human existence and consciousness. As usual, Hegarty handles this material with passion and nuance, and delivers performances that are simultaneously welcoming and otherworldly. Early reviews have been ecstatic: Pitchfork crowed about the albums subtle songs, and the surreal force of Hegarty’s “shivery warble”. The All-Music Guide calls Crying Light the pinnacle of the Johnsons catalog – “whatever hopes you held in the aftermath of I Am a Bird Now”, raves Thom Jurek, “they have been exponentially exceeded in poetry, music, and honesty here.” Even the traditional press has taken notice: Ann Powers gave the album a perfect score in last week’s Los Angeles Times.

Hegarty and Johanna Constantine have been working together since the early Nineties, and the “Epilepsy Is Dancing” clip proves their chemistry is still very much intact. Antony appears in the hallucination: like all Dorsey’s dancers, he wears a bejeweled mask. Animated flowers and butterflies flow out of his mouth as he sings, and his expression is blissful and kind. But this is Ms. Constantine’s trip, and she makes the most of it – after passing out on the concrete, she revives in the dream sequence, adorned with antlers and prepared to dance. There she is embraced by satyrs of both genders, made up in arty camouflage, and exalted and kissed by her dream-partners. Dorsey’s choreography nods to experimental theatre, butoh, and ballet, but inhabits an aesthetic tradition all its own. As such, it’s a good match with Hegarty’s singular, radiant, and wholly unclassifiable music.

We are honored to once again be working with the good folks at Secretly Canadian to bring you this delicate and delightful new clip. If you need more info, call Andy Gesner at 732-613-1779 or e-mail us at info@HIPVideoPromo.com. You can also visitwww.SecretlyCanadian.com or www.AntonyandtheJohnsons.com to find out more about Antony & The Johnsons.

For info about Antony & The Johnsons “Hope There’s Someone ” video, click HERE