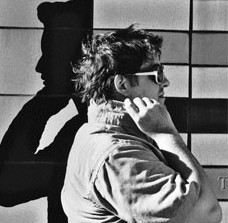 Hey, everybody! It’s Andy Gesner and the staff at Hip Video Promo, bringing you another clip from an intriguing independent rock band. We’ve worked with the great folks over at Barsuk many times before, and we’re sure you know the sort of music they release: tuneful, innovative slices of state-of-the-art alternative pop. Aqueduct is the latest in their line of inspired signings – a new group led by a charismatic frontman poised to take his place beside John Vanderslice and Ben Gibbard in the label’s own introspective pop Hall of Fame.

That frontman is Tulsa native David Terry, a bedroom pop songwriter and synth/electric piano player, and Aqueduct’s only permanent member. Terry made his own buzz in indie circles by releasing a tongue-in-cheekily titled LP, Power Ballads before relocating to Seattle. Barsuk has since joined up to release an EP, Pistols at Dawn, which proved Terry is no fluke in his ability of barbed and frequently sarcastic synth-pop. As likely to sing about his appreciation for Guns And Roses – and crib lines from “Patience” while doing so – as his emotional state, Terry presented himself as an arch ironist and penetrating writer. With a good notion of the absurdity of music industry posturing, the shattered artifacts of modern culture, and the folly of monumentalization, Aqueduct took on the rock legend with song after song, each catchier than the last.

I Sold Gold, the debut full-length, shares nine new Aqueduct songs with the world. The single, however, will be familiar to some listeners – it’s the lead track from Pistols At Dawn. “Hardcore Days & Softcore Nights” is a send-up of tough-guy tactics: Terry growls his threats into the microphone, and offers to cap overly inquisitive listeners. “Don’t ever ask me where I’m from”, he sneers on the verse, before leaping into the wigged-out chorus. He’s the personification of rock-star touchiness, defensiveness, and gratuitous secrecy, and he delivers the characterization with such conviction that it might take you a moment to figure out that he’s (at least partially) kidding.

The arrangement is characteristic of Aqueduct’s inventiveness, and the elasticity of Terry’s musical imagination. This is a rock song, really, but Terry experiments with frantic breakbeat drums, and dispenses with rhythm electric guitar. Instead, he covers the treble range with his electric piano and burbling analog synthesizer swells. When Terry takes a solo during the instrumental break, he does so on a synth patch that sounds like a vibraphone. More Mates of State than Ben Folds, this is a piano rock number with a nasty edge.

Todd Lincoln’s video for “Hardcore Days & Softcore Nights” is an artfully shot performance clip. He isolates instruments against different backdrops – some of which are tie-dye bold, and some of which look like the stone-faced exterior of suburban tract housing. Green light pours out beneath the kick-drum pedal; a guitar headstock and hi-hat are framed against a yellow rock surface. When Terry approaches the microphone, we see his profile against a swirling, psychedelic maelstrom of electric color. He spits his lyrics with a hard-faced stare away from the camera; bristling like a porcupine, comfortable in his standoffishness. No matter how hard he rocks – and he rocks hard – he doesn’t break character.

Aqueduct is yet another awesome offering from our good friends at Barsuk, and we couldn’t be happier to be a part of the team. The label has provided us with some our favorite artists and Aqueduct is no different. We will have CDs available for on air giveaways and fortunately for music lovers everywhere, they will be touring and will be available for interviews and IDs! For more information contact Andy Gesner at (732) 613-1779 or info@HIPVideoPromo.com. You can also visit www.Barsuk.com orwww.AqueductIsGoodMusic.com to find out more about this awesome new band.