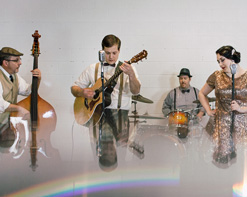 A quick listen to Metro Detroit band ATMIG and it’s no surprise that their name- which stands for “After The Money Is Gone”- is a Talking Heads reference (specifically, it’s a line from the song “Once In A Lifetime” from the 1980 album Remain In Light). Described by CW50Detroit as “folky, singer-songwriter tunes with poetic lyricism and raw vocals” with “shoegaze qualities dropped in there that make this a great psychedelic-folk listen”, it’s both loud and soft, both raw and produced, and completely heartfelt. ATMIG’s other influences range from modern indie rock (Death Cab for Cutie, Modest Mouse, and The Shins) to new-wave and alternative (The Cure, Smashing Pumpkins, Sunny Day Real Estate) to folk singer-songwriters (Johnny Cash, Elliott Smith).

Singer-songwriter Tobias met Otto (bass/chatter) through Craigslist back in 2012; however, it wasn’t until 2016 when the two booked some shows that they were joined by Otto’s long-time friends Dave (drums) and Julia (vocals). ATMIG’s lineup is now finally complete with the addition of Julia’s friend Phil (bass/ cigar box/ mandolin), and the band are set to release their first official single “Trip” on 4/22, which has the distinct honor of being the first non-label release pressed at Jack White’s new Third Man Vinyl Pressing Plant in Detroit!

Recorded and mixed by Tim Smith at Soundscape Studios in Royal Oak, Michigan, “Trip” is driven by a jangly acoustic guitar part, with simple bass and drum lines to tie it all together. Tobias and Julia sing about wanting to escape and “take a trip down someone else’s awesome life”; their gentle harmonies give the song a touch of fervent innocence.

For the “Trip” music video, ATMIG turned to Gravity Red Productions, a video production company in Detroit. The video follows a young girl as she daydreams and tries to escape reality while her parents are fighting. She presses her ear against the bedroom door, only to hear them argue- but by the time they’ve made it to the kitchen, she’s in a cardboard rocket, blasting off into outer space. When she comes back to earth, her parents are still fighting, and so she blasts off again, this time to fight a cardboard robot in the sky. Finally, she puts on her winter coat and walks out of the house. These shots are all interspersed with footage of the band performing, wearing suitably vintage attire.

We hope you enjoy blasting off into outer space with ATMIG in the “Trip” music video! Please let us know what we can do to get the video in your programming rotation and in front of the eyes and ears of your viewers! For more information please contact Andy Gesner and the HIP Video Promo team at (732)-613-1779 or email us at info@HIPVideoPromo.com. You can also visit www.Atmig.com for more info on Atmig.