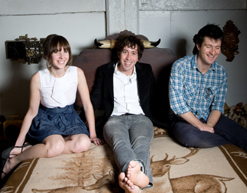 Greetings programming friends! It’s Andy Gesner and the staff from HIP Video Promo, here to share an endearing clip from one of the underground’s most reliably-entertaining groups. Most bands will (if their audiences are lucky) put out an album every other year. Then there are the prolific groups – those that annually reward fans with new material. And then there’s Bishop Allen. In 2006, the Brooklyn combo recorded and released 58 new songs on twelve EPs – one for every month of the year. This staggering achievement won the band the respect of National Public Radio, Rolling Stone, Spin, and blogs alike, and brought thousands of new listeners into the group’s orbit. The very next year, Bishop Allen released the critically-acclaimed The Broken String, which again featured new material as well as reworked versions of songs from the EP series. Not since the release of The Magnetic Fields’s 69 Love Songs had New York City been flooded with so many quality songs from the same source. When director Peter Sollett was looking for bands to perform in Nick & Norah’s Infinite Playlist, Bishop Allen was a logical choice.

It’s not the only time their infectious music has accompanied a dramatic work, either. “History Of Excuses”, a standout from theMarch EP, scored an episode of Scrubs. Broken String single “Click, Click, Click, Click” could be heard on Aliens In America. “Middle Management”, the song that the band performed in Nick & Norah, also highlights the soundtrack to the popular Major League Baseball 2K7 videogame from 2K Sports. Bishop Allen music has appeared in Andrew Bujalski’s cult films, and just as they did in Nick & Norah, the band members have even found themselves acting on screen. Write as many quality melodies as Christian Rudder and Justin Rice do, and your voice might become ubiquitous, too.

It’s ironic, then, that the first single from Grrr…, the upcoming release by the band, is a song about invisibility. With their usual wit and poise, Bishop Allen tackles encroaching obsolescence on “Dimmer”, and they do so with a sparkling verse and a barbed-wire hook. As always, the group’s arrangement sensibility is inspired: here, a gorgeous violin plays counterpoint to the bouncy melody. “Dimmer” communicates some of the intimacy and energy of Bishop Allen’s live set – they’ve become one of New York City’s biggest draws, and they’ll be taking the act across the country after the release of Grrr…

Filmmaker Randy Bell, who has also directed clips for We Are Scientists, is no stranger to the members of Bishop Allen: it was he who shot the clever clip that accompanied “Click, Click, Click, Click”. He’s back behind the camera for “Dimmer”, and he proves, once again, to be a dynamic and invaluable accomplice. Just as he did in the “Click” video, Bell plays with representation and expectation: here, pictures of the band members are projected onto a large white piece of paper. At first, it just seems like the images are faded a bit – but then a pair of scissors begins to cut along the outlines of the musicians’ bodies. It’s destabilizing: it is a visual metaphor for impermanence. Shots of Bishop Allen in action are every bit as hypnotic and strange – they perform together on a theatre stage, costumed, while film footage is projected on screens behind them. Flashlights briefly illuminate their faces – then they’re switched off, and the screen goes black.

We are thrilled to be working with Dead Oceans to promote Bishop Allen and the “Dimmer” video! We have plenty of copies ofGrrr… for giveaways and contests, so get in touch! If you need more info, call Andy Gesner at 732-613-1779 or e-mail us at info@HIPVideoPromo.com. You can also visit www.DeadOceans.com to find out more about Bishop Allen.