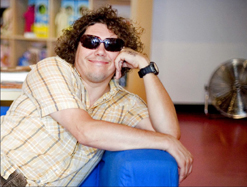 Hello everybody! It’s Andy Gesner and the staff from HIP Video Promo back again with more great videos. Here at HIP, Bobby Bare, Jr. is very close to our hearts: he was one of the first artists we ever worked with back in early 2001. We’ve followed his career with acute interest ever since, and took pride in the enthusiastic critical reception of his darkly funny and moving roots-punk full-lengths: From The End Of Your Leash and the just-released The Longest Meow. Along with the Young Criminals Starvation League, his band, the aptly-named Bare has put some refreshingly direct and self-aware Southern Rock into circulation during the ‘00s. His take on Nashville glitz, the two sides of the bright lights, and the rock and roll myth is wholly personal, yet instantly identifiable. In many ways, his music epitomizes the aesthetic of his idiosyncratic label, Bloodshot Records – an outfit that has always damned the commercial implications and thrown their full support behind a roster of  American oddball-visionaries. Bobby Bare, Jr.’s “Let’s Rock And Roll” is a suitable kick-off for Bloodied But Unbowed: Life In The Trenches, Bloodshot’s 32-track compilation of videos: a song that simultaneously addresses the glory and the absurdity of the independent music enterprise.

To say that Bobby Bare, Jr. grew up around music would be an understatement – by age five, he’d already duetted on record with his legendary dad, and snagged a Grammy nomination. Conway Twitty and Johnny Cash were good pals and associates of Bare Sr., and the biggest names in Nashville practically brought inspiration to junior’s crib. So when Bobby Bare, Jr. cautions about the perils of club life in “Let’s Rock And Roll”, it’s fair to call him an authority. “I wake up in the worst part of your town”, he sings, in a voice weary and bristling with irony, “drink free beer and sing ‘til I fall down”. The story gets more explicit from there, as Young Criminals Starvation League begin to take the title seriously: what begins as an alt-southern ballad ends up with a guitar throwdown. Bare himself never raises his voice, no matter how raucous the band gets, but he does punctuate his lines with unnerving staccato laughs, all echoed by his backing vocalists.

The clip for “Let’s Rock And Roll” opens with twinkling stage-lights, a pogoing, overenthusiastic Bare fan calling attention to himself, and the singer onstage in a rumpled lamé suit. It’s soundcheck at a typical indie rock club, and Bare looks game, but awfully tired. Later, we see him tucked in the back of a van with his sleeping bandmates, shopping at a convenience store, and hanging outside “Andy’s Music”, a small-scale local guitar shop. But the bulk of the video finds Bare seated on a bed in a tiny, crammed motel room and singing at the camera with an expression that hovers somewhere between exhaustion and total disbelief. In one memorable shot, Bare attempts to stay steady and deliver his complaint while girls jump up and down on the bed behind him. It’s a remarkable metaphor for the difficulty inherent in any attempt to communicate anything in a typical rock and roll context, and an appropriate lead-in for Bloodied But Unbowed: Life In The Trenches, a DVD about Bloodshot’s unshakable faith that, despite all the obstacles, it can be done. In addition to the clips here, the disc features performances by such luminaries as Graham Parker, Wayne Hancock, and Alejandro Escovedo, and it’s well worth checking out.

It is our great pleasure to finally have the opportunity to work with Nan Warshaw and Rob Miller at Bloodshot Records. The work they do out of their cramped offices in Chicago has inspired us for years. The folks at Bloodshot have been kind enough to supply us with copies of The Longest Meow for all your on air giveaway needs. Bobby Bare, Jr. will be on tour throughout the month of November, so if you are interested in meeting up with Bobby and the crew for a video interview, feel free to get in touch! If you need more info, call Andy Gesner at 732-613-1779 or e-mail us at info@HIPVideoPromo.com. You can also visit www.bobbybarejr.com, www.bloodshotrecords.com to find out more about Bobby Bare, Jr.