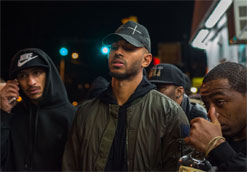 Must a person specialize? Or could he excel at many very different things? Brandon Tory has been confronting that question for several years now – and with “Seriously”, his latest single, we believe he’s answered it. He’s already established himself professionally as an ace coder and computer scientist: he’s currently a Level 5 engineer at Apple, which is rarefied air indeed. He’s also making a name for himself as a skilled R&B and hip-hop vocalist. And because he sees the connections between the two fields of endeavor he’s chosen for himself – he even wrote a provocative piece for Medium called “Multidream: Why rapping and coding are the same thing” – he’s able to apply the lessons he’s learned behind the keyboard to the work he does while he’s in the vocal booth. Tory approaches his music with the same determination, the same imagination, and the same mental precision that has made him a success at the most visionary technology company in the history of the world.

Tory’s new single “Seriously” builds on the success of his Yaga Season EP, a tight, ambitious, party-hungry set that won the young vocalist the admiration of legendary producer Timbaland. It wasn’t just Timbaland who flipped for Yaga Season: the set was praised by HipHopDX, Based Boston, The Hundreds, and other hip-hop media outlets. After the success of Yaga, Tory threw a huge party in the Hollywood Hills, called Multidream Weekend, without any of his fans knowing he was an engineer at Apple (over 1000 fans RSVP-ed, and capacity for the event was maxed at 600 people). The sultry sound of “Seriously” will come as no surprise to those who appreciated Yaga, but the intensity and urgency of Brandon Tory’s performance is unprecedented in his catalog. This is at once the most immediate and the most challenging music he’s ever made, and it’s bound to steam up the summer.

The treatment for “Seriously” was built from the momentum of Multidream Weekend, and Brandon Tory’s desire to tell his full story to fans, friends, and family. It’s a dream of technology in action, and a showcase for a drone, a driverless car, and some impressively huge flat-panel screen. It’s a contrast to “6OG” (featured on FuseTV), which shows the neighborhood he’s from – and which makes him stand out from the typical image of an Apple engineer. But Tory the programmer yokes the power of these impersonal devices to an altogether human cause, which we won’t spoil here. Not content with mastery of C++ programming and R&B, Brandon Tory also co-directed this video; unsurprisingly, it’s beautiful, colorful, and as visually impressive as anything from a major label-backed film studio, and it’ll likely leave you wondering if there’s anything he can’t do. Among other things, the “Seriously” video is a love letter to San Francisco, technology’s first city, shown here as a gleaming metropolis of tall buildings, wide streets, and world-famous bridges. But the focus is on the star, who proudly wears his Apple-logo jacket in the final shot – and if you were he, wouldn’t you?

It’s a profound pleasure to be working with a determined, passionate artist like Brandon Tory, and it is our hope that you embrace the “Seriously” music video like we have here at HIP! We’d love to see this video added into your cherished programming and online presentations in a timely fashion. Rest assured we’ll have plenty of Brandon Tory merch available for on-air contests and giveaways so don’t hesitate to get in touch. For more information on Brandon Tory, please contact Andy Gesner and the HIP Video Promo team at (732)-613-1779 or email us at info@HIPVideoPromo.com. You can also check out www.BrandonTory.com for more info and www.facebook.com/BrandonTory, www.Twitter.com/BrandonTory, and www.instagram.com/BrandonTory for recent updates on Brandon Tory.