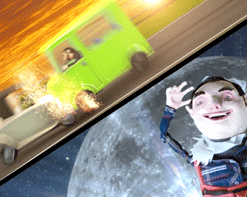 In the hit HBO series Curb Your Enthusiasm there is an episode when the main character Larry David is dubbed a “social assassin” because of his unfiltered tongue and his willingness to broach any topic with any person. Subsequently he is then dispatched to say the things that everyone is thinking but is afraid to say. In the show it’s an over-the-top gag but at its core there is something socially interesting about the concept. Why are so many obvious things allowed to slip by without their absurdity being challenged by anyone? In the case of these two videos we are about to show, Brian Kroll is the rock and roll assassin, and he’s got some significant annoyances in his crosshairs!

We’re excited to bring you two exceptional videos directed by the team of Beans and Bueller, which combine puppetry and digital animation to create a slick presentation. Their work has been described as a combination of the styles of the Chiodo Bros. (stop-motion) David Lynch (film making) and Jim Henson (puppetry) and through their own unique puppet character creation they’ve created a visual look that is very distinctly their own. They’ve taken this puppets in a madhouse look and created not one, but two videos for the music of Brian Kroll!

The first subject, appropriately enough, is the Christmas holiday! By now we’ve sent you a handful of delightful and festive videos that are both original and remakes that celebrate the season. But let’s get real for a minute, there are those among us who can’t stand this time of year because it means an unwanted amount of drama that we’ve spent the better part of the year avoiding. In his killer new video “Flight Deck (For Christmas),” Brian Kroll calls it as he sees it. The holidays make him insane! Whether it’s the sarcastic sneers or the nosey questions and snooty tones, he is quick to declare exactly where he’ll be on Christmas. On the flight deck. Also known as the funny farm! And the laughing house! The video is an amusing take at the other side of the Christmas season!

For the second video, “Death By Texting,” Brian takes on a growing problem in our society that is both deadly and idiotic. The lyrics are a straightforward attack on the absurd obsession we have with texting and driving. The video follows two characters, “Driver A” and “Driver B,” and you can imagine what happens next when they don’t keep their eyes on the road. Boom! Game over. Time to head up to the pearly gates……just as soon as they send that last text! Filled with OMG and LOL moments, this clip is deceptively serious and after the smile leaves your face, you won’t be able to help think about the message it sends!

Although these videos are both visual treats, the thing that stands out most is Brian Kroll’s hook-infested rock anthems that will stick to your ears over and over again. The production is top notch, the instrumentation and performance is like a modern formula for classic rock, and we’re incredibly proud to be working with this artist to bring you these awesome videos. For more information please contact Andy Gesner and the HIP Video Promo staff at (732)-613-1779 or email us at info@HIPVideoPromo.com .