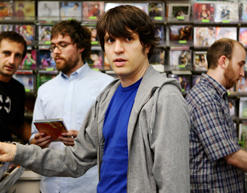 Greetings fellow music video lovers! It’s Andy Gesner and the staff from HIP Video Promo, hoping you are sharing in some of this fabulous summer weather we’re having here in New Jersey. Here on the East Coast, the sun is shining, the nights are warm, and the clubs are hopping. In Downtown Manhattan, it often seems like there’s a rock show on every corner; across the river in Brooklyn, the pavements bleed music. In an environment like this, it’s almost impossible for a young band to attract any attention – but Bridges and Powerlines have managed to beat the odds and establish themselves as one of the city’s true indie favorites. They’ve done it by gigging around Gotham relentlessly (they recently completed an “outerborough tour” that took them to neighborhoods that most hipsters neglect), playing long-running parties at hot clubs, courting the local alternative press (the influential Deli magazine loves them), and by penning irresistible indie-rock songs.

Ghost Types compiles the best and most exciting of the band’s material. It’s dense and compelling power-pop, performed with enthusiasm and sung with detached, nerdy cool by Andrew Wood. The heady Bridges and Powerlines favor scratchy guitars and buzzy, haywire analog synthesizer; they’re also partial to character studies, musical short-stories, literary irony, and telling details. Many of the tracks on Ghost Types are narrated by introspective workers: steamship captains, cabbies, laborers keeping the urban infrastructure humming. Theirs is indie rock that’s brainy enough for New York City webloggers, sufficiently theoretical for the college set, and propulsive enough to dizzy up the rest of the nation.

Produced by Chris Zane (Asobi Seksu, Les Savy Fav), “Uncalibrated” is the purest introduction to Bridges and Powerlines’s slightly-twisted worldview. The track rides in with a giddy Moog lead before exploding into a hooky chorus; it’s just the sort of undeniable indie rock track that can compel a roomful of jaded hipsters to hit the dancefloor. The song seems destined to focus national attention on Bridges and Powerlines: Yahoo Music has already posted “Uncalibrated” on its main page, and Pitchfork followed with a feature of their own. “Uncalibrated” led the B&P charge into the CMJ Top 200, as left-of-the-dial radio stations across the country have gotten excited about the NYC quartet with the ingratiating sound.

Like many of Bridges and Powerlines’ songs, the clip for “Uncalibrated” juxtaposes the small and human with the large, cold, scientific, and impersonal. The video opens with an official-looking map of the nation; this fades into an animated sequence of two DNA-filled cells dividing. A high-school instruction film? Not exactly – instead, it’s the backdrop for a band of endearing sock puppets. Like Bridges and Powerlines, the puppet band is a quartet; also like B&P, every move they make is enthusiastic and purposeful. They don’t, however, have hands, so they’re forced to take their Moog solos with their faces and twist the knobs and throw the switches on the instrument with their mouths. Other sock puppets are along for the fun, too, including identical zebra-striped twins, a googly-eyed green customer, and a pink scene-stealer with an orange feather boa. It’s sweet and geeky, bright and even occasionally glorious – and just like the track, there’s something undeniably haunting about it, too. In short, it’s a perfect late-spring anthem for New York 2008, and maybe the rest of the country, too.

It’s our huge pleasure to have the opportunity to work in tandem with Keith Sigel and the CityBird Records crew to bring you this fantastic new video! Keith has hooked us up with lots of copies of Ghost Types for your on-air giveaway needs so drop us a line to get your hands on some! If you need more info, call Andy Gesner at 732-613-1779 or e-mail us at info@HIPVideoPromo.com. You can also visit www.BridgesAndPowerlines.com to find out more about Bridges and Powerlines..