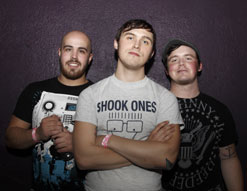 Label:
SIDEONEDUMMY RECORDS
Video:
“BE ALL THAT YOU CAN’T BE”
Director:
Josh Landan
Add Date:
August 31, 2009

Greetings from HIP Video Promo headquarters! We trust you’re having a fabulous summer, and you can count on us to supply your season with explosive new music. The first album by Broadway Calls took many punk rock fans by surprise. Tuneful, energetic, and crammed start to finish with absurdly-catchy songs, it became one of the best-loved underground releases of 2007, and established the Rainier, Oregon-based quartet as an act to watch. Here was the rare pop-punk band that has drawn as much inspiration from classic groups like the Buzzcocks, Bad Religion, and The Clash as they have from their contemporaries on hit radio. Billy Joe Armstrong was a supporter; he had, in fact, given the band its first opportunity to record. Enthusiasm for Broadway Calls has even crossed the Atlantic – the band’s debut was ecstatically-received by Kerrang! and the NME, and they’re poised to perform at the Leeds and Reading Festivals later this summer. They’ve toured through Europe with Alkaline Trio (a band that shares a similar aesthetic), and they’ll soon travel to Germany and Italy in support of The Offspring. Back home, they’ve been one of the undisputed highlights of this year’s Warped Tour, and everywhere they’ve played, they’ve stoked anticipation for their follow-up album.

Now that follow-up – the fiery Good Views, Bad News – is here, and it opens up new dimensions in the band’s sound and approach. Producer (and Descendents drummer) Bill Stevenson pushed Broadway Calls to take chances, and the band has risen to the challenge. Sure, they still play it hard, fast, and impossibly catchy, and they remain as winning as any punk combo in America – but while the first album mostly concerned the tribulations of life on the road, Good Views, Bad News broadens the Broadway Calls outlook considerably. “Be All That You Can’t Be” uses Army recruitment as its central metaphor, and ends up making a trenchant comment on military culture; other tracks on the record are just as fiercely (and courageously) written. No wonder, then, that Absolute Punk.Net has already called Good Views, Bad News “the best pop-punk record of the year, and one destined to be a classic in the genre”.

If Broadway Calls hadn’t given us a performance clip, that wouldn’t have felt right: they’re completely committed to touring, and their live show is positively incendiary. So there’s plenty of footage of the band in action in the “Be All That You Can’t Be”, and it demonstrates just how kinetic this group can be in a concert setting. Lead singer Ty Vaughn is impassioned on the microphone throughout, and drummer Josh Baird and bassist Matt Koenig play with the kind of conviction that can’t be faked. But there’s a narrative in the “Be All That You Can’t Be” clip, too: the recruiting sergeant stalks these frames. He’s after one kid in particular – a blue-collar worker with a child at home to care for. His quarry isn’t martial by nature, but he certainly needs the money. “You smile and you pretend as you hand guns out to my friends”, spits Vaughn, as the video reinforces his sad, and all-too-true, story.

By now we know to expect nothing but the best from Side One Dummy Records, and they have delivered for us once again! If you need more info, call Andy Gesner at 732-613-1779 or e-mail us at info@HIPVideoPromo.com. You can also visitwww.SideOneDummy.com to find out more about Broadway Calls.