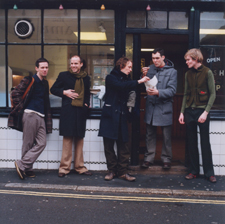 A big warm hello to all my programming friends! It’s Andy Gesner and the staff from HIP Video Promo with another terrific video from our friends at Rough Trade. You’ve heard about them, probably. They’re the band that did shows in archaic military uniforms, filled their stage with stuffed birds, and subjected their audiences to the sweet pain of abrasive guitar feedback and the pure pleasure of their aching pop melodies. You might have fallen in love with their sensational debut album – a rough, literate, unpolished gem with hard, cool surfaces, weird luster, and a deep inner light. They’re British Sea Power, and here at HIP Video Promo we are excited to be able to bring you the first video from Open Season, their highly-anticipated sophomore album.

When The Decline Of British Sea Power arrived in late 2003, it sounded like nothing else on the planet at the time. Dense, Bowie-esque, formidably intelligent and passionately sung, the collection topped many critical “best of” lists and won BSP a permanent place among the annals of offbeat British visionary artists. Rolling Stonestood in awe before the group’s “mystical, jumbo-sized guitar waves”, while Mojo praised the “stadium-sized melodies and exquisite songwriting”, before raving that “the intense, intelligent, nonconformist listener has a new band to love.”

“Please Stand Up” is an album highlight: a mid-tempo rocker with a gigantic beat, a scalding guitar hook, and a soaring chorus on which Yan wrings all of the feeling and unfulfilled desire out of his cracking voice. On Open Season, it ebbs into the monumental “North Hanging Rock”, a statement of purpose which offsets the grandeur of “Please Stand Up” with a slow burn. British Sea Power have already proved they can play it rough: here, the group shows they’re equally deft at crafting gorgeous tales of heartbreak and longing.

Nick Wickham’s beautiful clip for “Please Stand Up” finds the band in a small cottage in the British countryside. Light streams through the windows as Yan lifts his story to the ceiling and beyond. Elegantly rendered time-lapse video captures the English country sky: fluffy clouds streaking across the blue. They seem pushed by the music; driven by the immensity of the sentiment. British Sea Power is presented as at once isolated and connected to the rolling hills and the vast tapestry of nature. The images are stark, solitary, perhaps a bit cool and dampened – yet the atmosphere inside the cottage is electric. The band plays with a poise bordering on feigned disaffection, but beneath their reserve, a mad, smoldering desire to break down the walls and to become connected is evident. Yan stares out the window, yearningly, his imagination fired by the broad sky and the lure of the wide open places.

It’s always a pleasure to work with Sean Maxson and all the folks at Rough Trade, and we’re ecstatic to team up with them again to bring you this intriguing video. We have plenty of copies of the Open Season CD for on-air giveaways and we would be happy to schedule interviews for you while the band is on their current tour, so keep your eyes peeled for when they come through your area. If you need more info call Andy Gesner at 732-613-1779, or email info@HIPVideoPromo.com. You can also visitwww.roughtraderecords.com, or www.britishseapower.co.uk to find out more about this kinetic musical force.