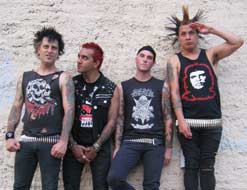 Label:
SIDEONEDUMMY RECORDS
Video:
“WE ARE ALL WE HAVE”
Director:
Frankie Nasso
Add Date:
January 25, 2010

Hello fellow music lovers, it’s Andy Gesner and the staff from HIP Video Promo, hoping you’ve all recovered (more or less) from your New Year’s revelry. We’re starting the decade off with a bang: a ferocious new clip from one of the New York area’s most respected punk rock bands. By now, fans of underground punk know exactly what to expect from The Casualties – buzzsaw guitars, frenetic tempos, irresistible shoutalong choruses, catchy hooks, and impassioned performances by the musicians. This quartet means to leave you breathless, sweating, singing along with everything you’ve got, and for more than a decade, they’ve been giving their audiences exactly that experience. And while they don’t write polemics or sling slogans at their listeners, there’s a distinct and refreshingly rebellious political consciousness in their heartfelt lyrics.

Since they’re far too modest to say it themselves, we’ll go ahead and say it for them: unlike so many others who’ve exploited the genre for profit or fashion, The Casualties are real punk rockers. All the drama, desperation, goodwill, and us-against-the-world camaraderie that animated the original punks is present in their fiery songs. “We Are All We Have”, the lead single from the album of the same name, is a statement of faith – a rallying-cry from the gutters and backstreets, and an affirmation of the catalytic power of underground music. “This noise is all we’ve got”, barks dynamic frontman Jorge Herrera, “so let me hear you sing!” He doesn’t have to ask his band twice – they’re right behind him, roaring along.

As inspiring as it is to hear, it’s just a teaser for the multifaceted We Are All We Have. At once their most ambitious and most accessible album, the band’s eighth long-player further develops their bruising, uncompromising, fist-pumping sound. There’s plenty of old school punk rock here, including cuts reminiscent of the great second-wave British bands still venerated on both sides of the Atlantic. Echoes of The Exploited and the legendary G.B.H. are audible in the short, savage tracks that make up the bulk of the album; elsewhere, The Casualties refine their pronounced reggae and dub influence. Ecuadorian-born Herrera lists several Spanish-language bands as heroes; the international flavor of the band’s music is apparent here, too. And the sociopolitical commentary has never been sharper: songs like “War Is Business”, “Stand Against Them All”, and “Depression – Unemployment Lines” feel trenchant, sharply-observed, and (sadly) appropriate to the moment.

And like all great punk bands, they let you know exactly where they’re singing from. “Lonely On The Streets – Jersey City” is a missive from the often-overlooked left bank of the Hudson – the town that The Casualties are currently calling home. The clip for “We Are All We Have” finds the band overlooking one of Jersey City’s busiest streets; municipal structures, old decaying tenements, and new condominiums loom in the background. (The Statue of Liberty is even visible in a few shots). They’ve climbed to the top of an urban building, and they’ve set up above the town – it’s an impromptu concert on a gritty rooftop, and, as always, the band gives it everything they’ve got. Herrera is front and center, waving the black-and-white Casualties flag. Later he carries it through the deserted city streets, and squats on a riverside jetty, the blue Hudson swirling beside him.

We’re happy to be kicking off the New Year right with our friends from Side One Dummy and this explosive new video. If you need more info, call Andy Gesner at 732-613-1779 or e-mail us at info@HIPVideoPromo.com. You can also visitwww.SideOneDummy.com to find out more about The Casualties.