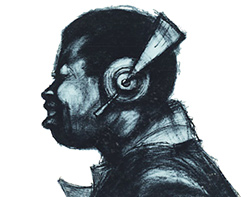 Charles Wright rose to prominence as the frontman of the seminal funk soul group Charles Wright & the Watts 103rd Street Rhythm Band. Throughout the 1960s they hit the Billboard charts with 9 different singles, most notably the classic jam “Express Yourself.”

Over the ensuing decades, Wright saw a constant renewed interest in his catalog as artists from N.W.A. to Naughty By Nature to Sean “Diddy” Combs have sampled his wax for their own releases. His music has also seen extensive screen time not just in an endless number of commercials, but also having been featured in full length features like Mr. and Mrs. Smith, Cheaper By The Dozen, and The People Vs. Larry Flint. Another hit record, “Do Your Thing”, set the stage for a 1970s pornographic study of Boogie Nights.

Now it’s 2016 and Charles Wright is positioning himself for another career resurgence with his brand new single “Looking For An Ugly Woman,” from his new album, Something To Make You Feel Good. This tongue-in-cheek soul jam is filled with all of the grooves and melodic intricacies that Wright has mastered over the years, but it is Wright’s now-smooth and velvety voice that carries this playful life lesson over the finish line.

The video for “Looking For An Ugly Woman” is a sun-soaked boardwalk adventure that follows Charles as he spends a day out on the legendary Santa Monica Pier in the hunt for a woman to suit his heart. He’s tired of always trying to trade up to the newest and shiniest model and all of the baggage that goes along with it. So today, he’s cruising the Pacific Coast Highway to see what the California coast can offer and he is in luck! He’s found himself a beauty (definitely not ugly!) to keep on his arm for the day, but will she be the right fit or will she just be in it for the wrong reason$?

Huge thanks to Karvin Johnson and the team at NMAP and KES Music and Video Distribution, our mid-west partners, for presenting all of the best funk, soul, and jazz artists making waves on the musical landscape. It’s an honor to be working with the legendary Charles Wright and we’re hopeful you’ll support this clip as enthusiastically as we are! For more information please contact Andy Gesner and the HIP Video Promo staff at (732)-613-1779 or email us at info@HIPVideoPromo.com. You can also visit www.ExpressYourself.net or www.KESDistribution.com for more info on Charles Wright.