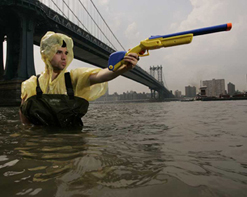 Greetings and salutations music video programmers nationwide! It’s Andy Gesner and the first class staff from HIP Video Promo once again bringing you a soothing new video that is sure to catch your attention! Some indie musicians are great singers – terrific interpreters, elastic vocalists, engaging stylists. But there are few who’ve got Voices: purely personal, idiosyncratic sounds that draw listeners into an intimate relationship to the music they’re singing. Nick Drake had a voice like that. Sam Beam of Iron & Wine and Antony of Antony and the Johnsons do too: they seem to be singing somewhere deep inside the listener’s head, or heart, or whispering in her ear. To those ranks we now add Chris Garneau, a Brooklyn singer-songwriter whose live performances have left Gothamite audiences spellbound, and who has been the talk of the city’s most influential websites for the better part of a year.

His voice is characteristic, fragile, quavering, honest, immediate. But it’s not un-polished: Garneau has a theatre background, and has been singing in shows and clubs since he was a teenager. (Garneau was involved in the heralded, courageous “indie rock” revival of Frank Wedekind’s Spring Awakening, which opened in Manhattan last year.) There’s nothing Broadway-theatrical about the performances on Music For Tourists, though. Instead, the young singer floats delicate melodies over piano and cello, demonstrating remarkable breath-control and sensitivity to emotional nuances. Produced by Duncan Sheik – another chronicler of intimacy and a fellow-traveller of sorts – Music For Tourists follows Garneau’s characters through heartbreak and late-night ambivalence toward self-awareness. It can be uncomfortable at times, but it’s never less than riveting.

Reviews have been laudatory. Music for Tourists is delightfully sparse and features enough space for immediate introspection”, writes Ryan Foley in Stylus. “It quietly evokes Pink Moon-era Nick Drake, another singer-songwriter with an alluring, fragile presence.” Webloggers have been even more enthusiastic; the influential NYC music-news site Stereogum raves that “we like to think of Chris Garneau as everything we wish Damien Rice actually was: reveling in distraught, heart-wrenching cello-laden tunes with both authenticity and – this is huge – a bit of perspective.” Fans compare him to Rufus Wainwright, and Jeff Buckley, and his revelatory cover version of “Between The Bars” invites comparisons to the late Elliott Smith. We think you’ll agree that while he shares certain qualities with all of those singers and writers, he’s already developed an approach entirely his own. And he’s only 24 years old.

As you’d expect from a former stage actor, Garneau has tremendous presence. Dori Oskowitz, who has also shot videos for rockers Something For Rockets and Nickelback, discovers and exposes a core of toughness in Garneau. His clip for “Relief” finds the young singer behind the counter at a city diner, singing softly to the patrons and, more usually, to himself. He cleans up after the customers: poorly-disguised transvestites, rumpled-suited businessmen, hipsters, tattooed truckers. At times, he’s at their mercy – under the tables, picking up after them, carrying their dishes, or flushing them out of the lavatories. But he maintains an air of rueful resignation: he’s got the stance of the learned observer, guarded but approachable, a sly smile disguising any discomfort. His heart goes out to these tired faces – his song is for them.

Cory Brown and the crew at Absolutely Kosher have always been the label we can count on to deliver top notch videos (they are the folks that brought us the +/- {Plus/Minus} “Steal The Blueprints” video last summer)! They have also been kind enough to set us up with plenty of copies of Music For Tourists to hook you up for all of your on-air giveaway needs. Chris will also be at this year’s SXSW Festival, so let us know if you want to meet up with Mr. Garneau in Austin! If you need more info, call Andy Gesner at 732-613-1779 or e-mail us at info@HIPVideoPromo.com. You can also visit www.ChrisGarneau.com to find out more about Chris Garneau.