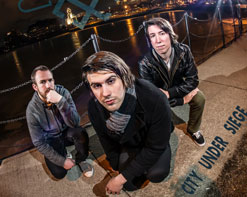 The band consists of John Wittlinger,Ryan Wiesner, and Matt Buscarino who put together songs containing variations of influences that span a number of different musical genres. Throughout the years they have worked with Sam Conjerti, Jr., who is known for writing songs for multi-platinum artists such as LFO as well as music featured in major motion pictures such as Soul Men and Amreeka. City Under Siege has taken huge strides over the coarse of one year, being that their first full US tour took place in August of last year opening up for Rookie of the Year.

City Under Siege has just returned from the studio in Atlanta working on a new EP with producer Matt Malpass who has worked with artists such as Reliant K and Lydia. They have shared the stage with well known acts like Ryan Cabrera, The Rocket Summer, The Spill Canvas, Strata, Hit the Lights, The Ataris, and many more! Their newest video “Believe” features Ryan Dunson of Rookie of the Year, and proves to be one of the most inspiring and motivational pop-rock songs to be released this year.

The video for “Believe” holds a certain type of energy that is highly positive and upbeat. It’s really no wonder why internet personality and HIP pal Bryan Stars was quick to feature the video on his YouTube channel. We watch as band members stroll through different situations and settings, handing out flyers and mingling with their peers. The band finally make it to the stage by the end of the video, and it turns out that viewers have waited in utter anticipation for this moment to occur! The song features Ryan Dunson of Rookie of the Year, a band that has worked side by side with City Under Siege. The song captures the true radiance of this band, and gives us a sneak peek as to what City Under Siege will do next!

The high energy and raw, organic intensity that exists behind the production of City Under Siege’s songs presents contemporary music listeners with a band that has every thing going for them—from pop/rock elements to catchy vocals, City Under Siege are teeming with highlighted characteristics, and there clearly is no way of stopping them. For more information on this exciting new band, please contact Andy Gesner and the HIP Video Promo staff at (732)-613-1779 or email us at info@HIPVideoPromo.com . You can also visit www.Facebook.com/CityUnderSiegeMe.